Ever since we returned home from our RTW trip, we’ve been trying to see as much of the UK as possible, getting away for the weekend whenever there’s an opportunity. So when we were invited to stay a few nights at the Esplanade Hotel in Newquay over half-term, we leapt at the chance. Neither myself nor Rob had ever been to Cornwall before, and the Esplanade has a great reputation as a family-friendly accommodation, so we left the kitten with a sitter (sniff) and hit the road once again.

Brighton to Cornwall is a long old drive, so on the way there we broke it up with a couple of nights along the way in Chichester and at Paultons’ Park. We arrived in Newquay in the early evening, to see crowds of surfers in the sea and families playing on Fistral Beach – it looked sublime. The Esplanade had kindly reserved a parking space for us right outside the hotel, so we raced inside with the intention of unpacking as quickly as possible and getting out to explore a little before dinner. 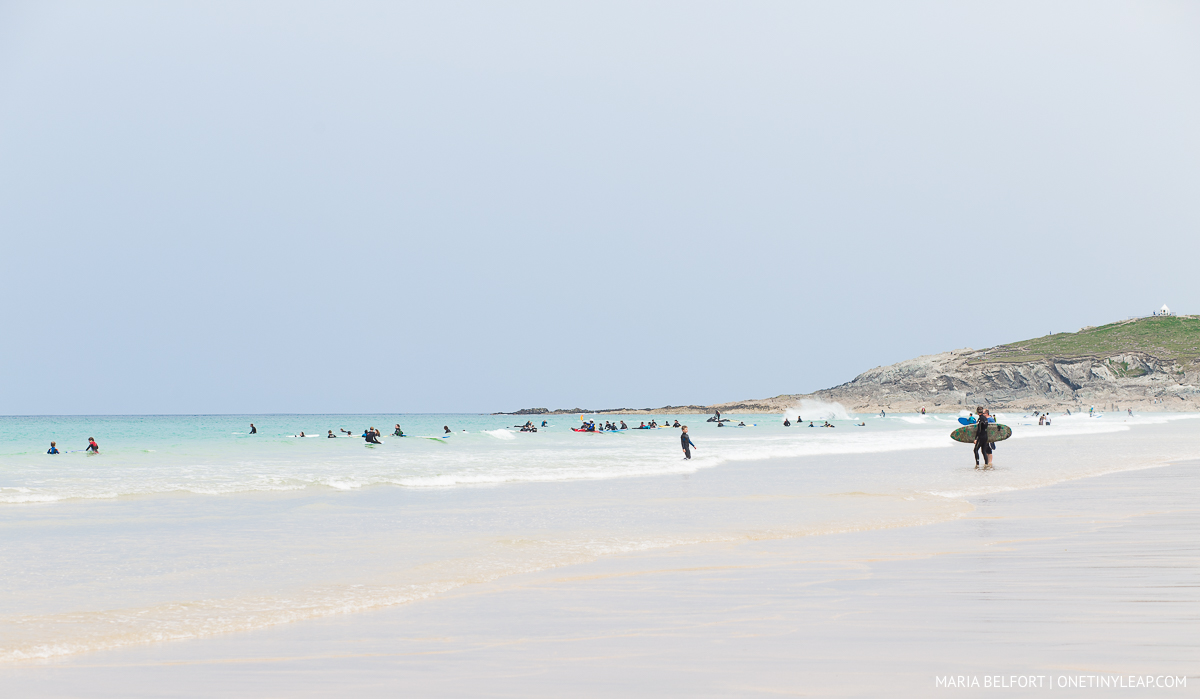 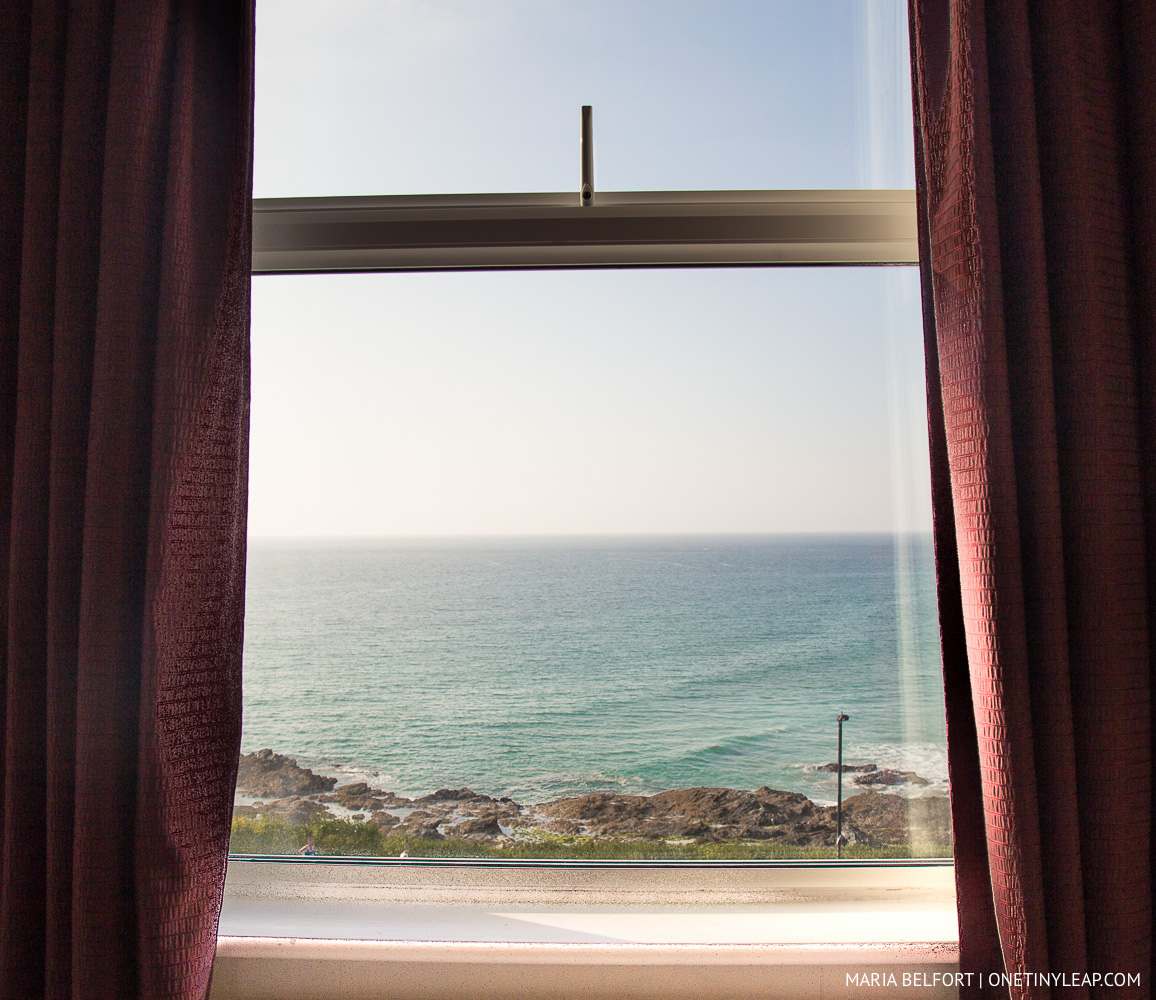 That never happened though, because as soon as we walked into our room we were instantly captivated by the incredible sea view from our window. Our son, on the other hand, was more excited about the bunk bed, and the bag of goodies the hotel had kindly laid on for him, including stickers, a wristband, and the makings of a Build-Your- Own-Bear! 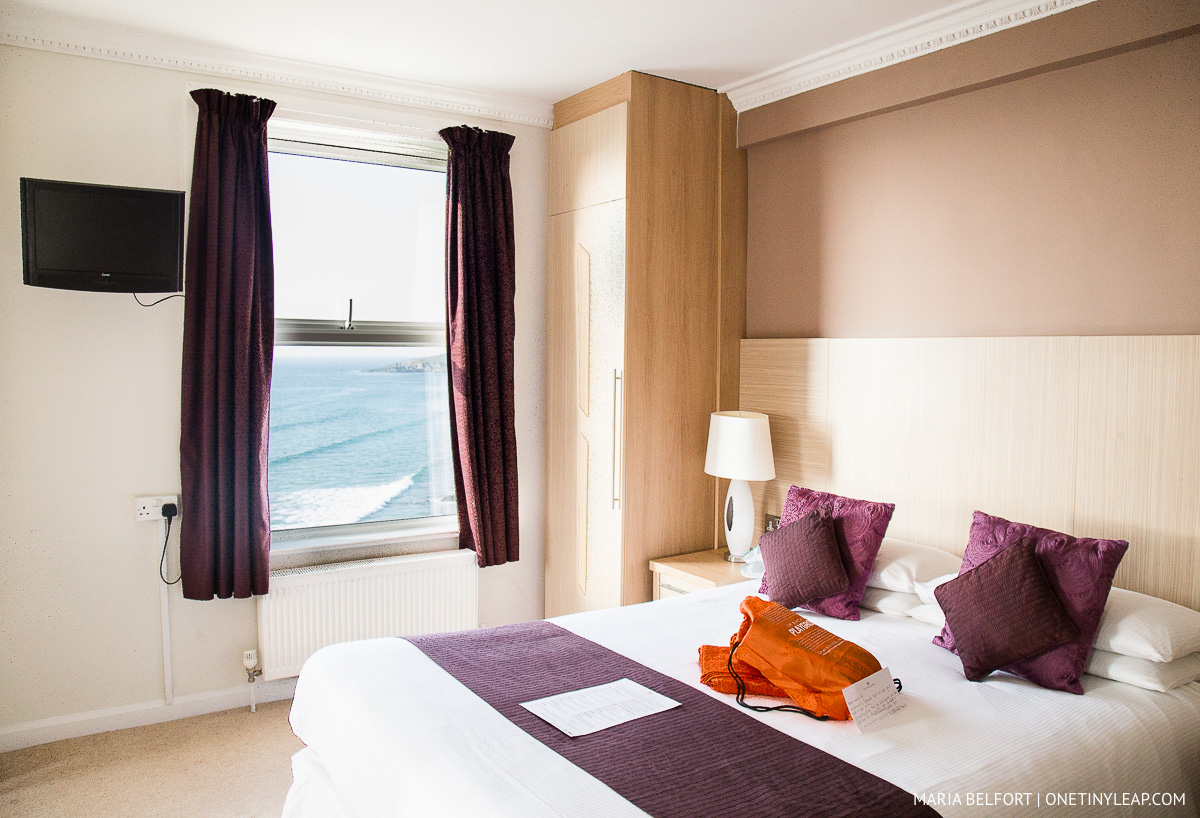 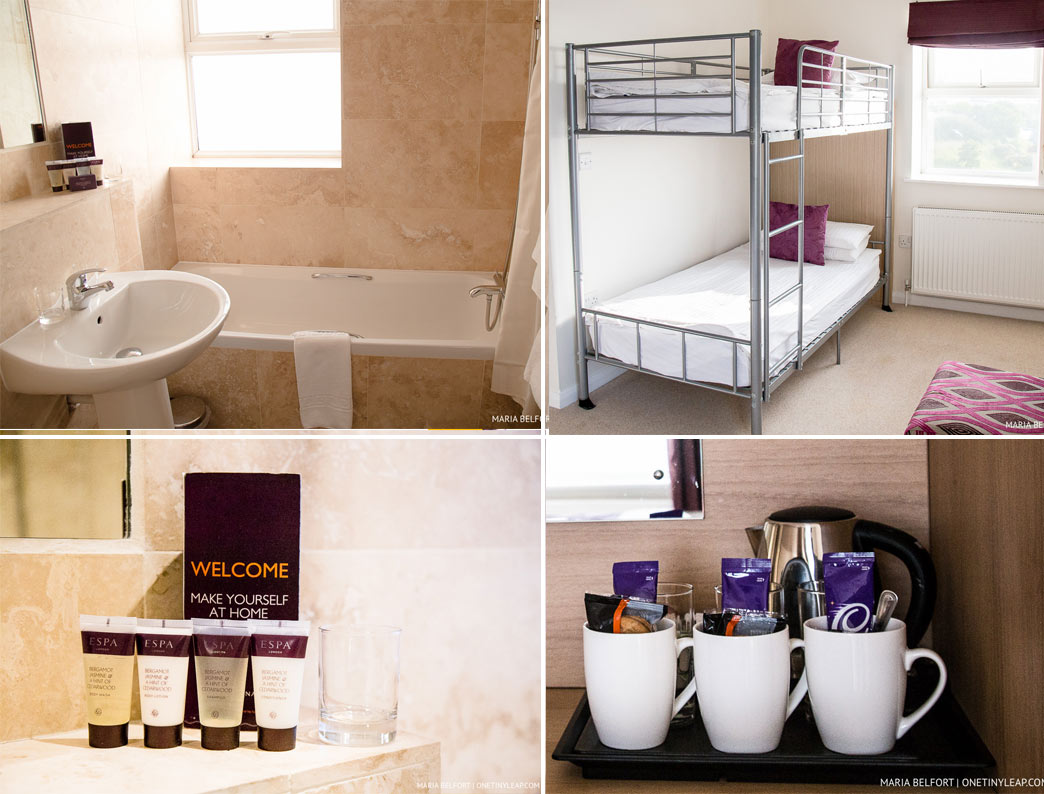 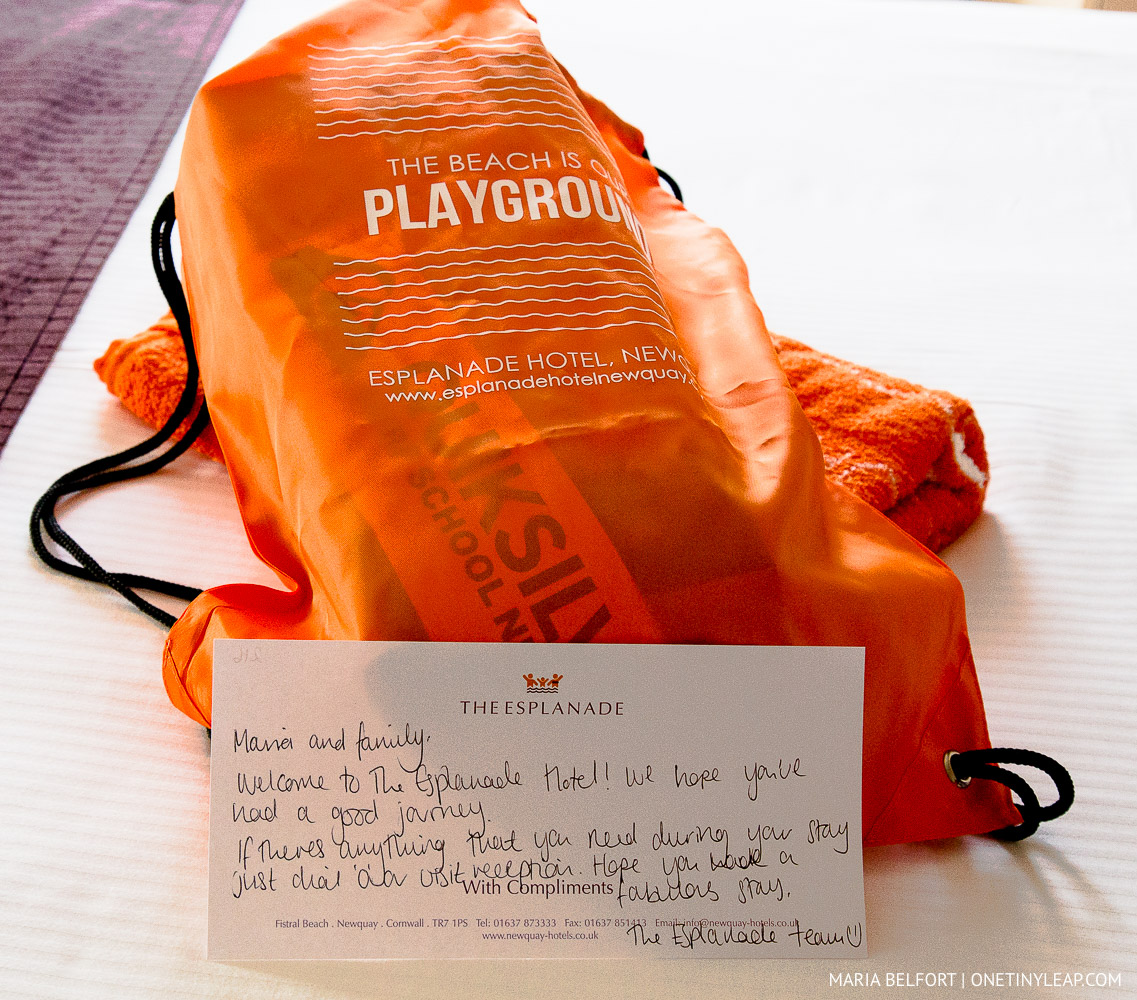 We ate in the hotel that evening, and enjoyed a table next to the window so we were able to catch a majestic sunset over the bay. There was time for a short wander along the clifftop, but we were so tired from the drive, and had so much planned for the days ahead, that we turned in early. 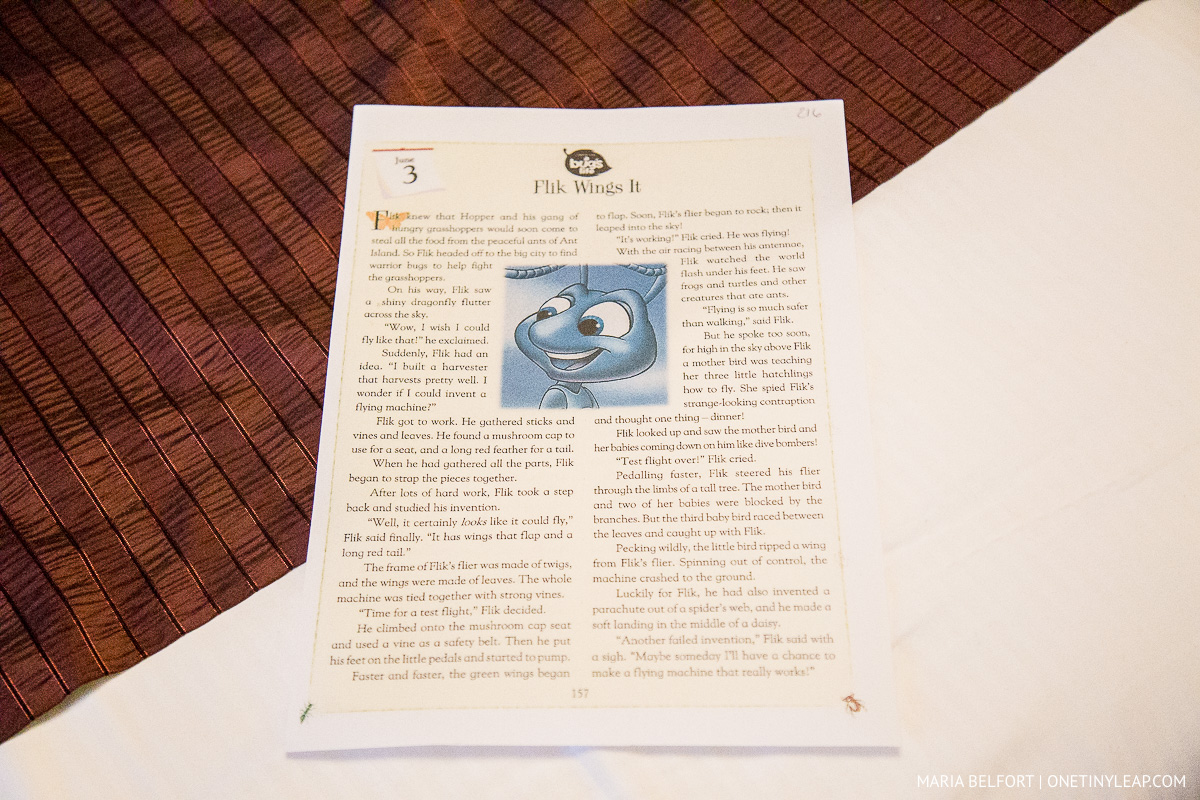 Tip: If you’re staying at the Esplanade with young children, don’t worry about bringing too many books.

Besides play areas, fun activities and movie sessions, the hotel also slips a lovely bedtime story under your door every morning.

A really nice touch, I thought.

The following morning, after a slap-up feast (I have to say the Esplanade really does a great breakfast) we decided to take the short walk down to the beach – the path runs down from just opposite the hotel, so it’s super-convenient. I mentioned the Esplanade is really focused on looking after families – well, besides a mini soft-play, great pool and a pirate ship in the back garden, they also provide fishing nets and buckets for any kids that want to explore the rockpools on the beach. Charlie was literally jumping with excitement about this! Unfortunately for us, but fortunately for them, we didn’t find any crabs. I think they all scuttled underneath rocks as soon as they heard us splashing towards them. 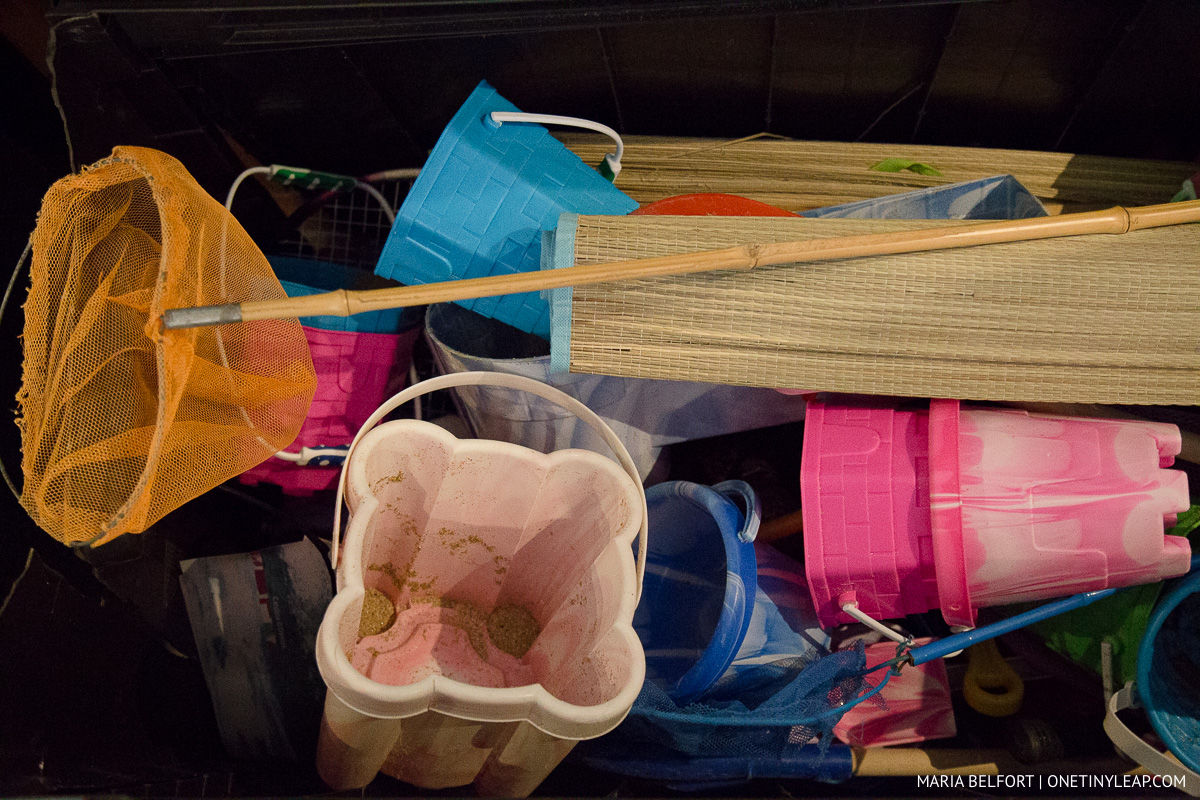 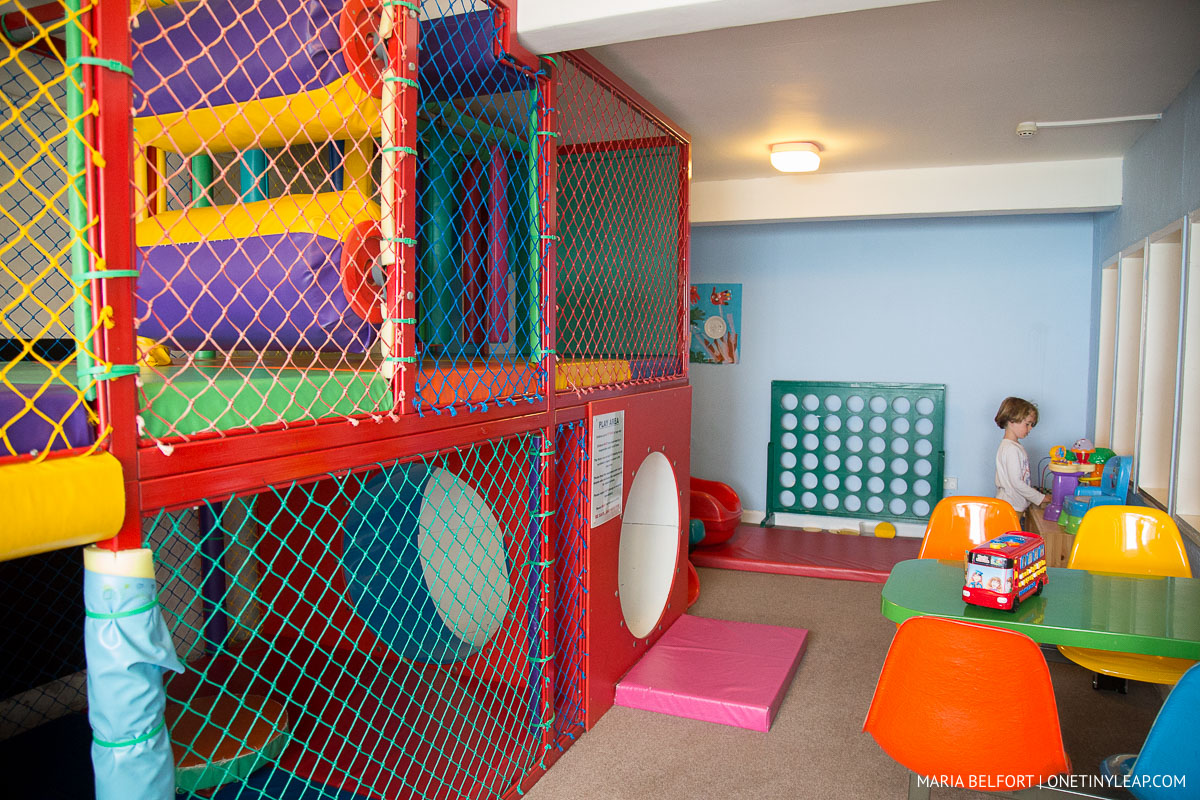 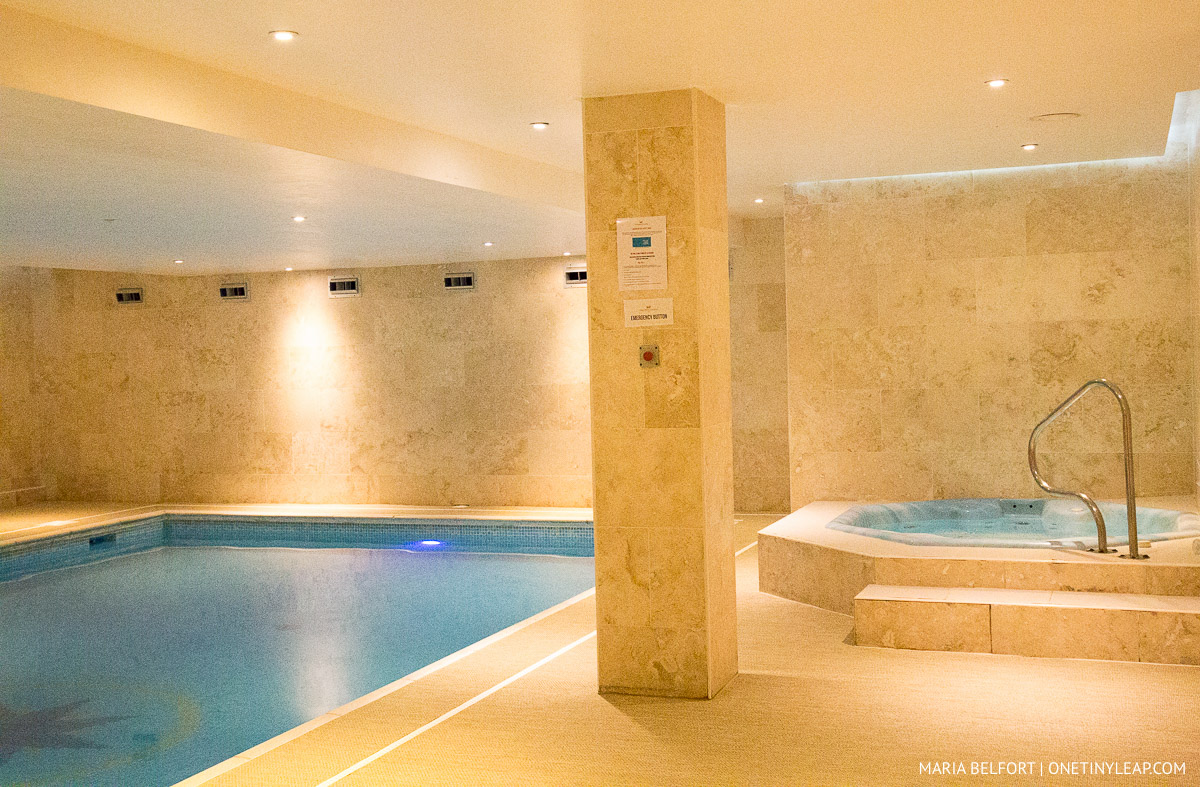 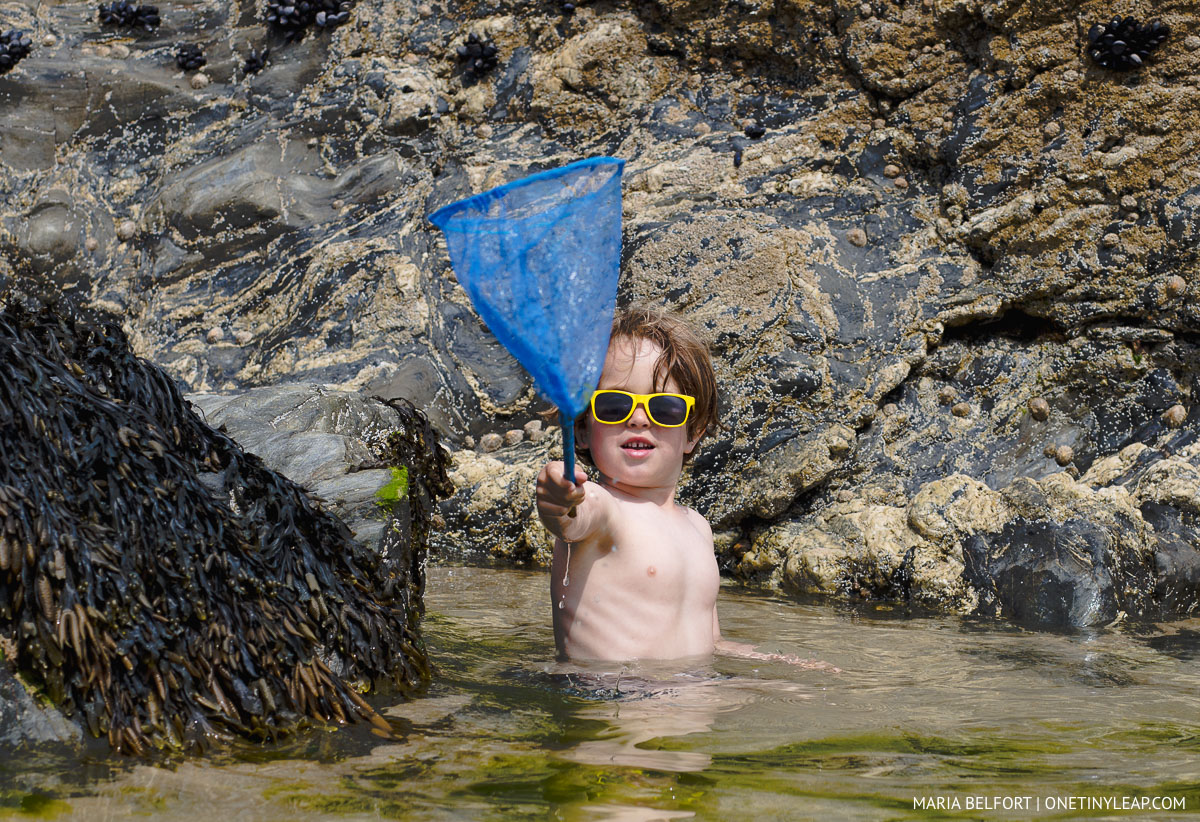 We had also been kindly invited to visit Newquay Zoo as part of our stay, so next we made the short journey into town. I’m normally not a great fan of zoos, but Newquay Zoo does contribute to several conservation projects in the wild, so your entrance fee and any donations can make a difference where it counts. We got to see lions, penguins and my favourites, the lemurs, and Charlie got to meet his first peacock, which was roaming around freely. 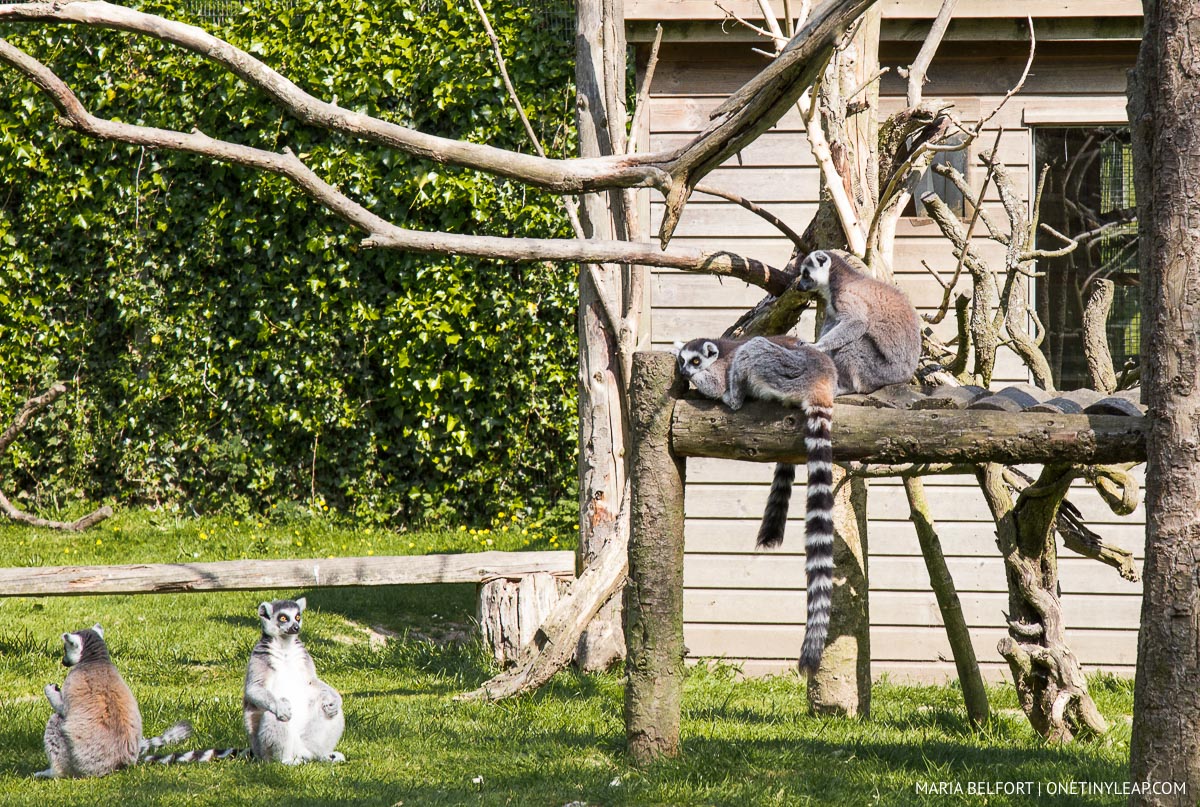 By now we were pretty hungry, so we grabbed some fish tacos from Rick Stein’s restaurant overlooking Fistral Bay, and just enjoyed the gorgeous scenery. The RNLI were on the beach that afternoon meeting holidaymakers and explaining their work – lifeguards are a constant visible presence on Cornish beaches, and they do a vital job. They were also kind enough to give Charlie a bucket and spade which put a big smile on his face. 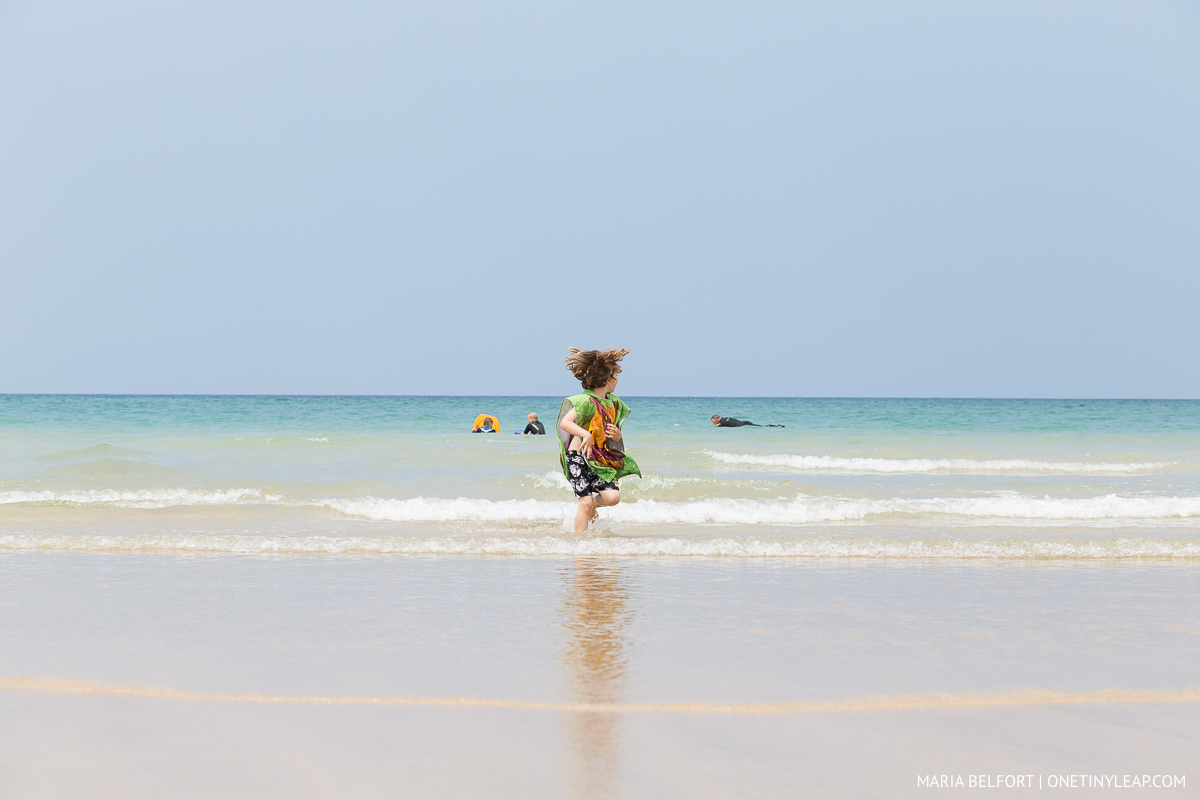 Our second full day spent in Cornwall was simply idyllic. I cannot put it any other way. It began with a me getting a real treat and a few hours off being a mum, which I spent getting what I’m happy to admit was one of the best, most relaxing massages of my life. Thanks to Fistral Beach Hotel & Spa, and my super masseuse Tanya (seriously, ask for her!), I came out feeling refreshed and revitalised, something I needed more than I realised. 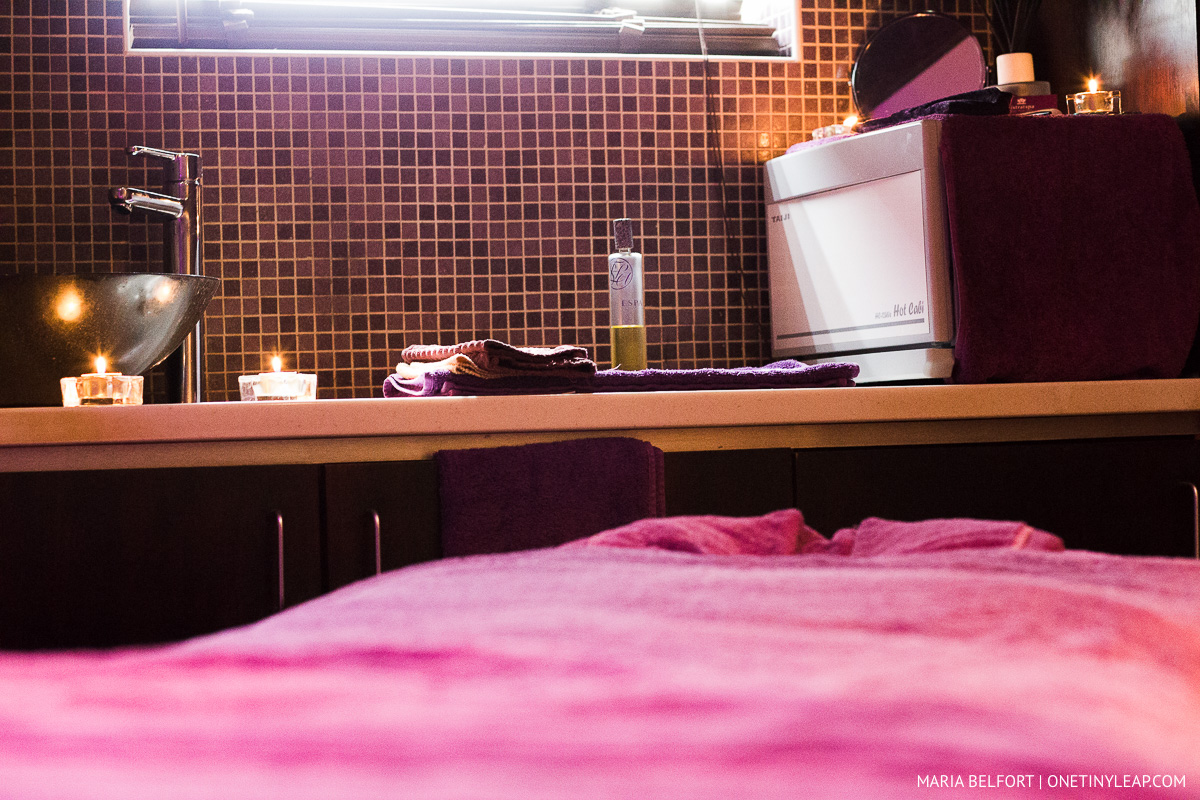 I arrive back at the hotel just in time for a mega-tantrum from Charlie who wasn’t too keen on the idea of getting back in the car. After reaching a deal whereby he would be allowed to play on the tablet for a while in return for his acquiescence, we embarked on a little road trip.

First stop was gorgeous St. Agnes Bay, about 10 miles from Newquay. This small fishing community is a popular spot for those in the know. We started with a delicious Cornish ice-cream, as you do, then took a wander through some huge and spooky caves. The fishermen were loading their lobster pots and heading out to sea for the day, and we watched them from the rocks. 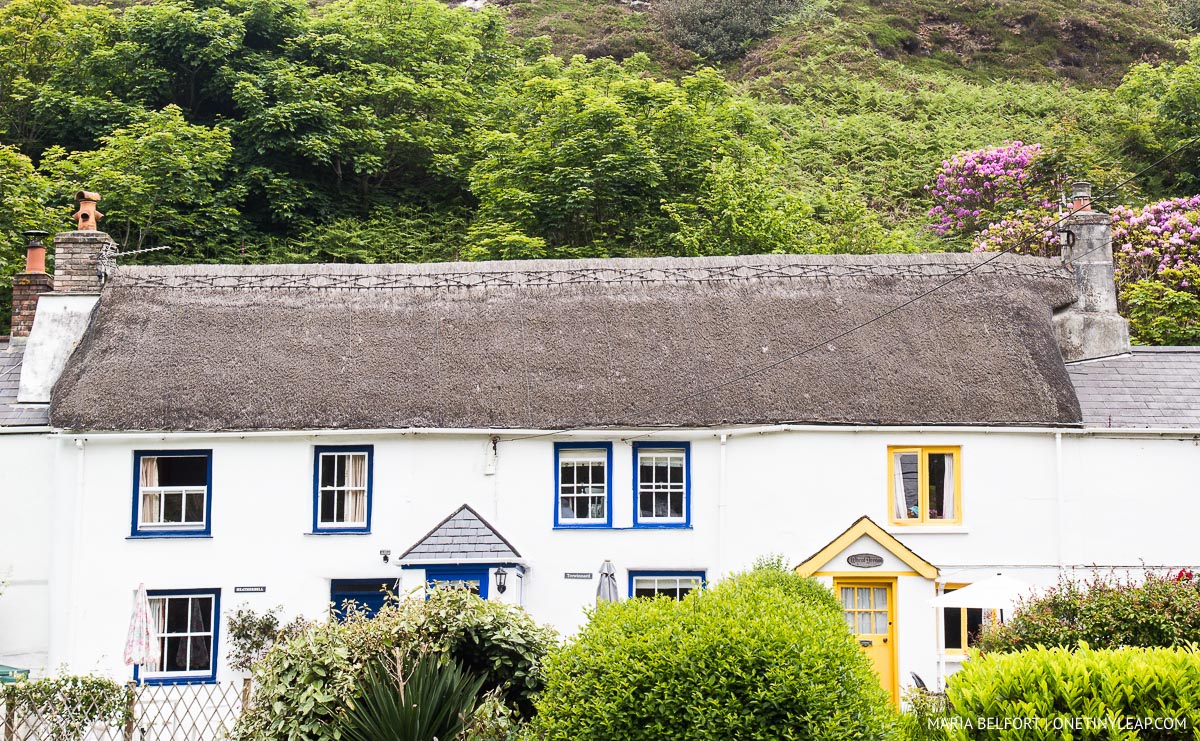 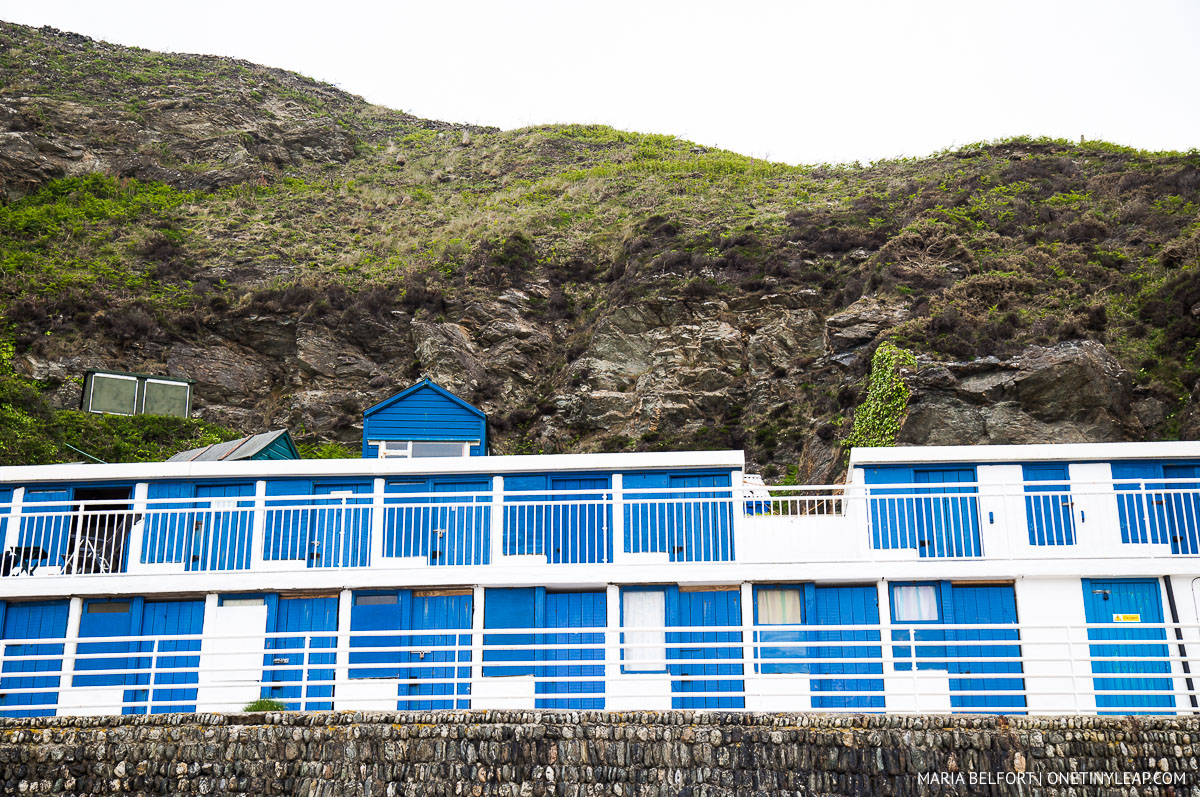 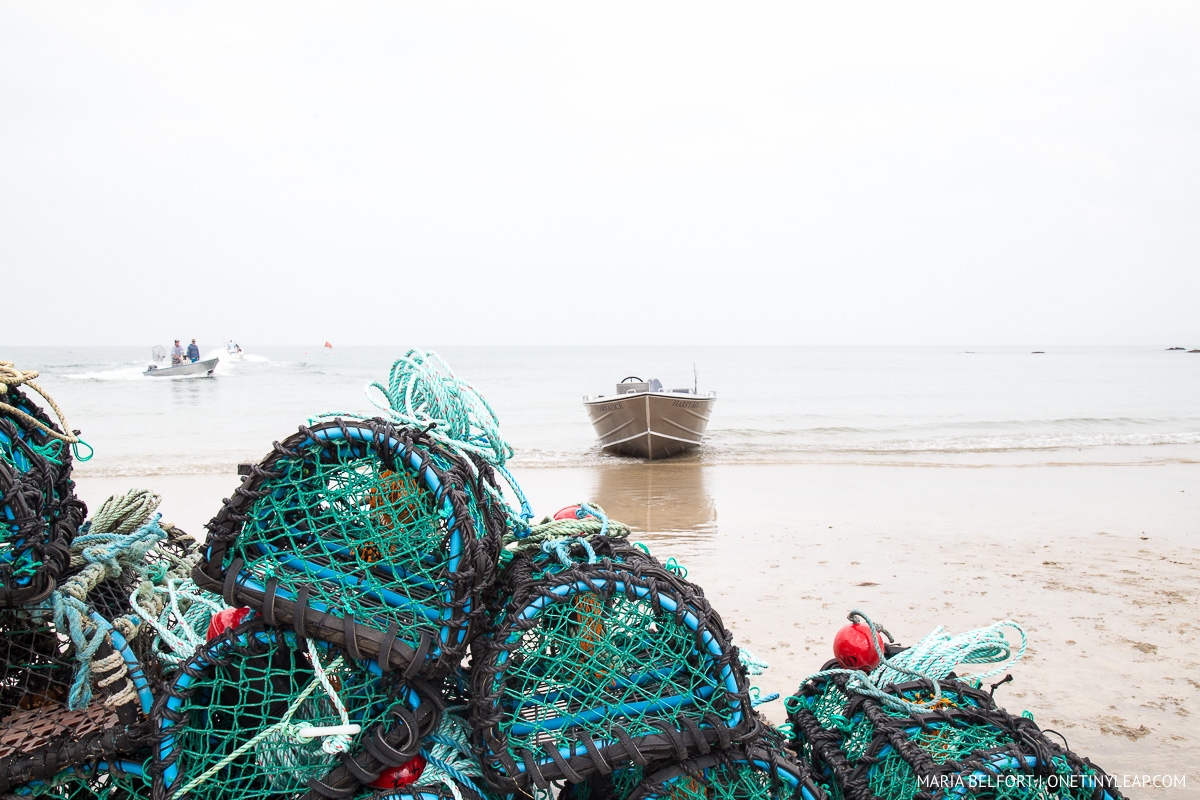 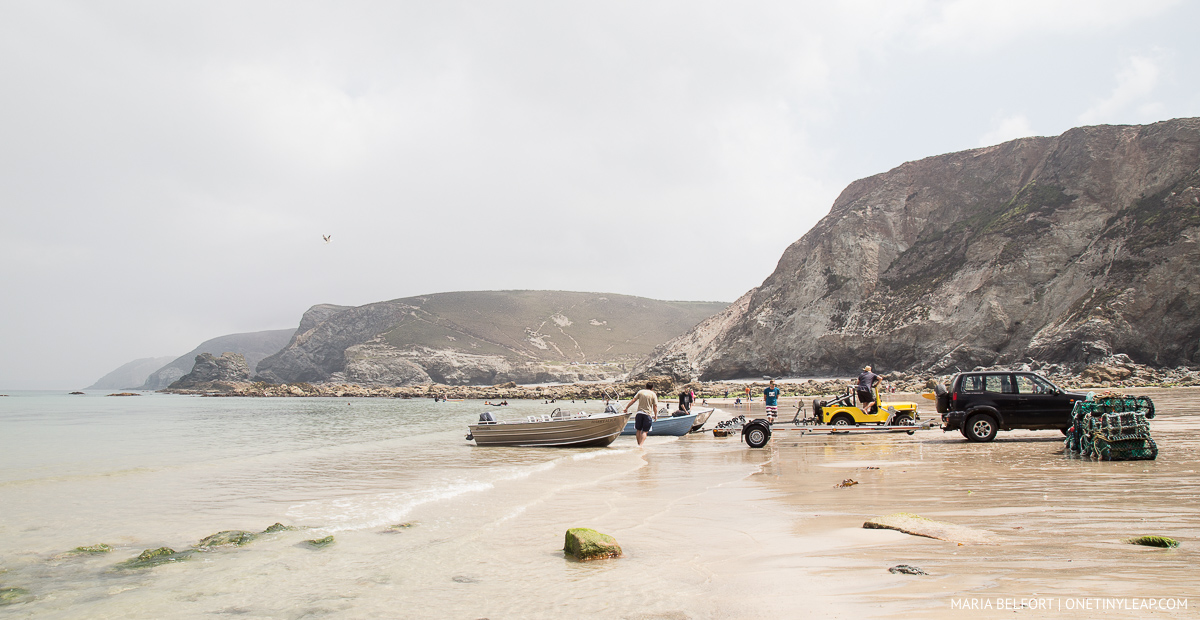 By now, we were all feeling pretty hungry, and rather than succumb to the temptation of another ice-cream, we headed towards St. Ives.

Tip: During the season, this picturesque seaside town gets very, very busy and it can be difficult to find a parking space, so remember that some restaurants offer free parking for their diners, or you can park in Carbis Bay and take the train into St. Ives, a journey of just a few minutes.

We decided to take the train in, parking in Carbis Bay but before we boarded, we noticed a lovely Mediterranean-style restaurant overlooking the pretty beach with a free table overlooking the beach with our name on. Within a few minutes we were seated, and tucking into delicious plates of fresh Cornish mussels, and some king prawns. This impromptu snack was the best meal we had in Cornwall, in no small part due to the stunning views. So nice was the beach, in fact, that we decided to chill for a couple of hours on the sand. 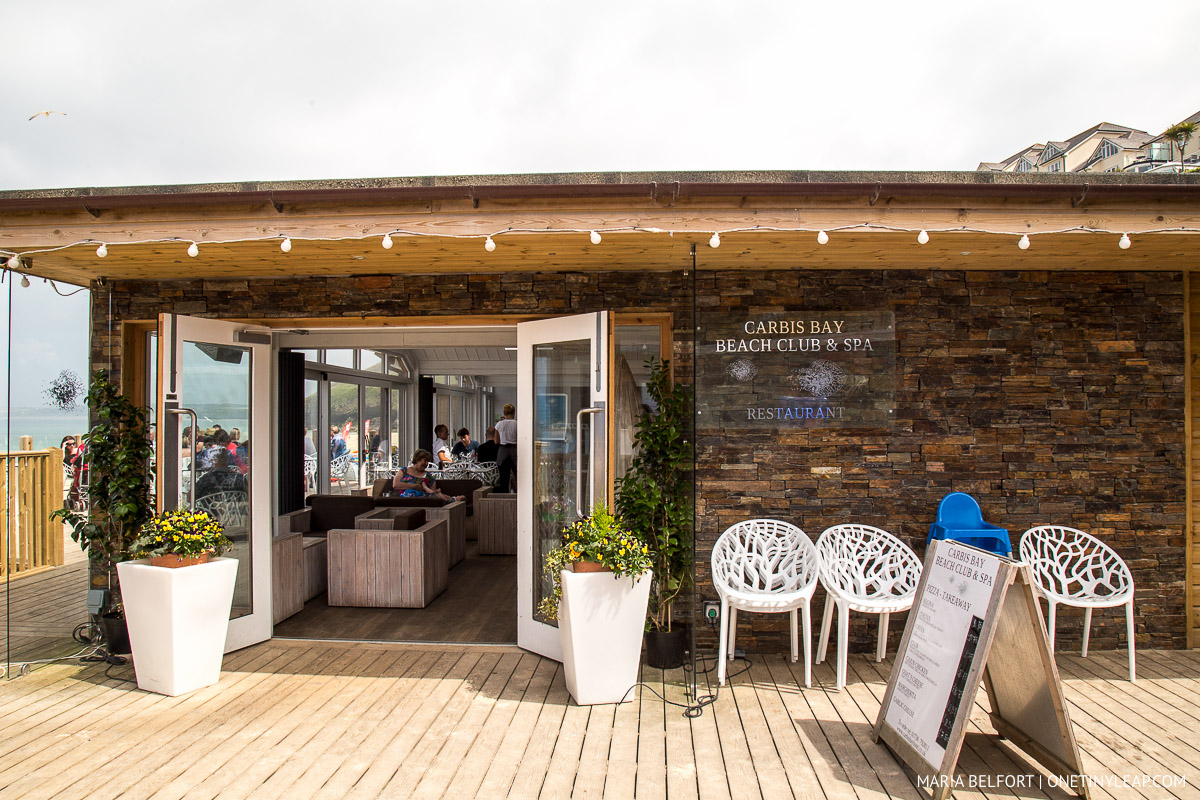 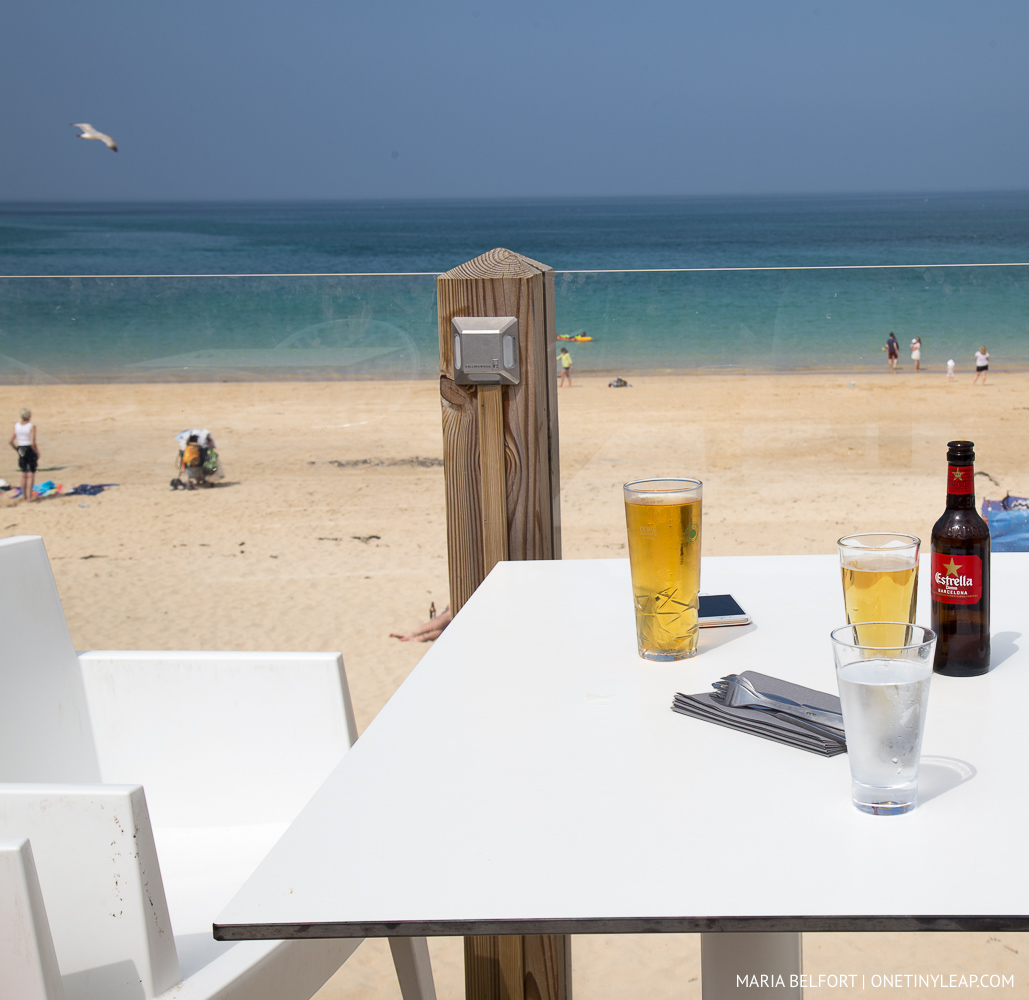 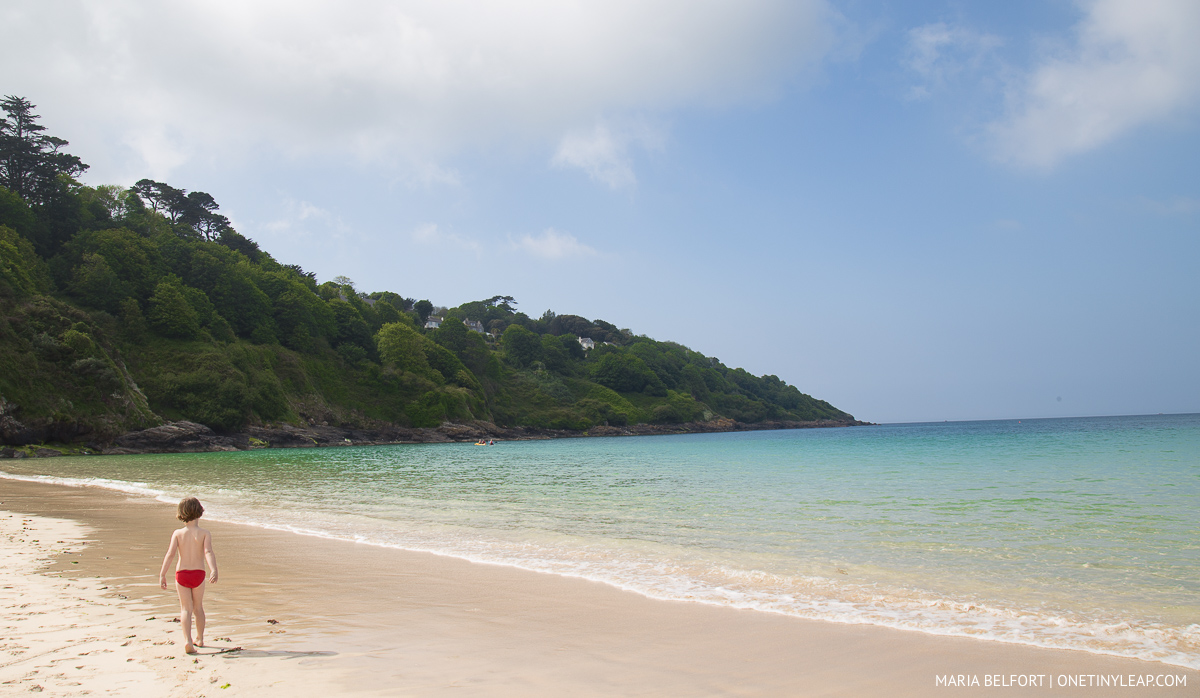 As the afternoon wore on, we brushed the sand from our shorts and made the short journey to St. Ives. Charming little side-streets hide all manner of architectural treasures in this picture-postcard perfect town, so it’s well worth having an aimless wander around as we did.

The centre is quite small so it’s difficult to get lost. In the harbour area there are a number of interesting curio shops, and it’s quite common to encounter some cheeky seals on the hunt for discarded fish from the boats, though we didn’t see any unfortunately. 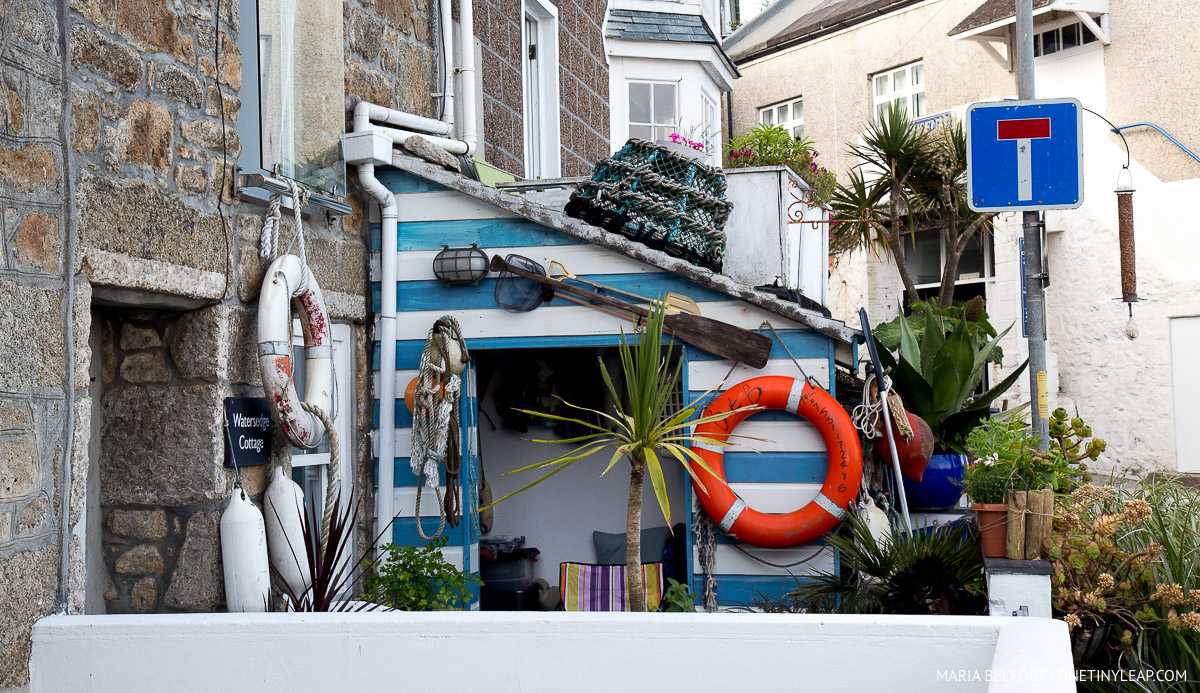 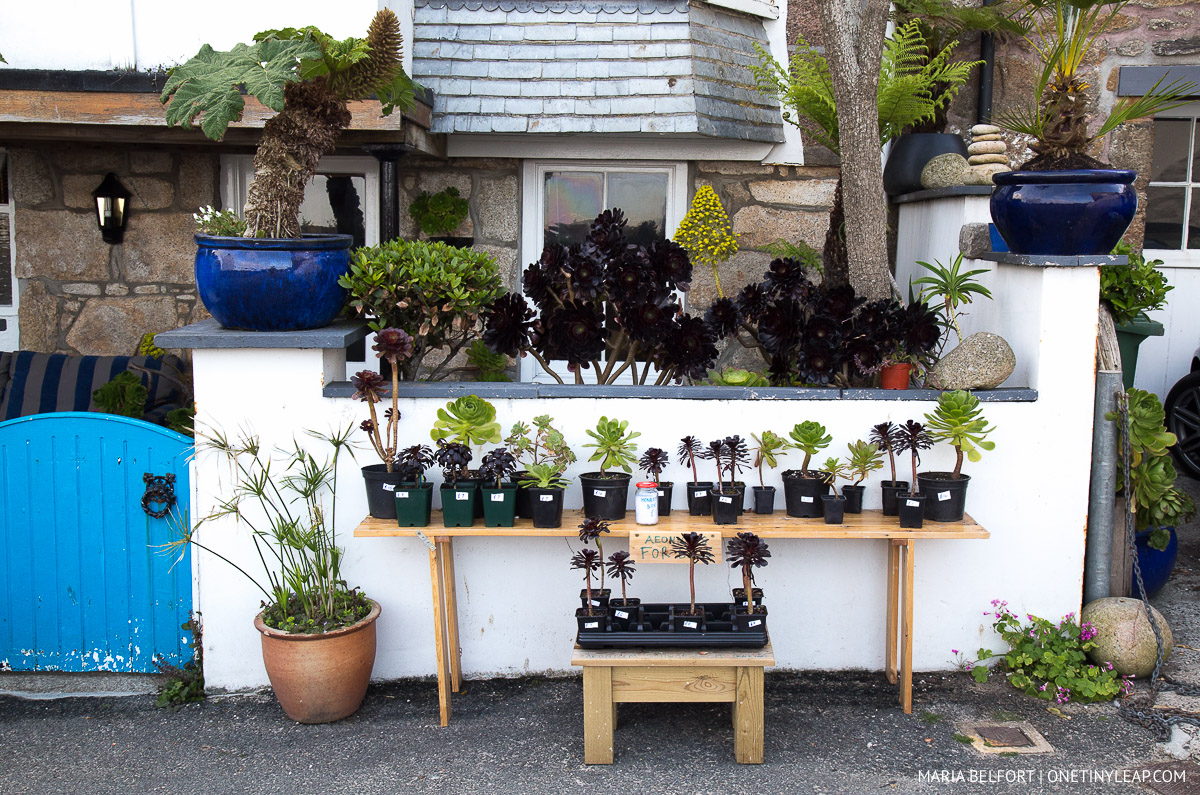 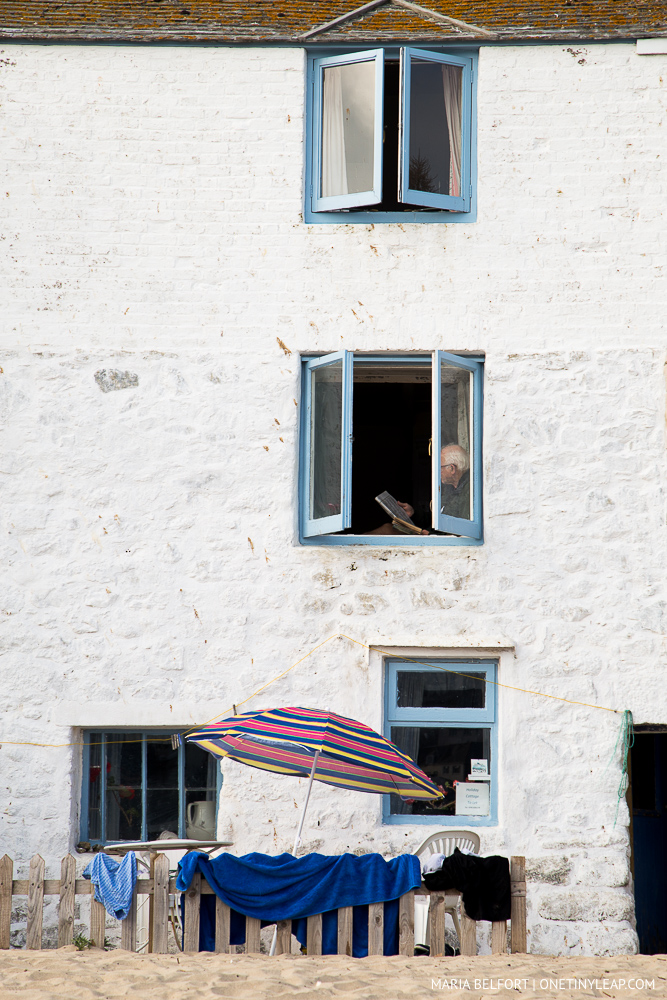 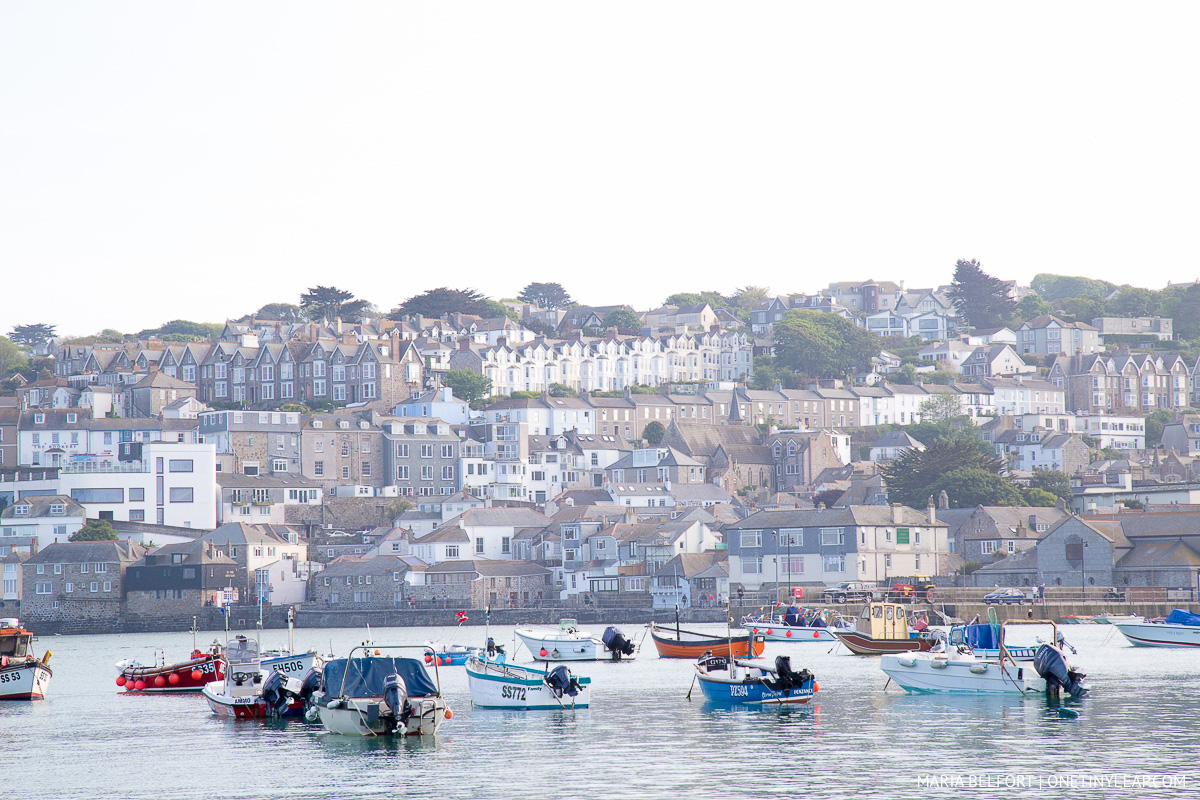 With the sun beginning to set, we spent a blissful half-hour just driving around the Cornish countryside, drinking in the spectacular scenery. Sometimes the great joy of a road-trip is just looking through the window.

Checking out, the Esplanade had given Charlie a little questionnaire so he could record his own thoughts on our stay. His favourite meal? Fish ‘n’ chips. His favourite activity? Crabbing on the beach. His favourite part of the hotel? The soft play. Again, a really nice touch, well-played Esplanade. I really think this is one of the most family-friendly hotels we’ve stayed at in the UK, and in such a great location too.

Back on the road home, thoughts naturally turned to our kitten and whether she would have had as enjoyable holiday as us. Probably not though. This was our first holiday in Cornwall but I’m certain it will be far from the last.

PLANNING YOUR FAMILY HOLIDAY IN CORNWALL

The Esplanade is one of the most family-friendly hotels we’ve had stayed in. I mentioned it above in the article, but I’d like to highlight the little details the hotel has put together to make the kids feel really special: daily story delivered to your room, three free activities every day which range from face-painting, build-a-bear workshops, and kids’ cocktail making! On top of this they have spacious family rooms that sleep up to six and sea-views to die for.

nb: We were kindly invited to stay at the Esplanade Hotel in Newquay, but we loved it so much we stayed an extra night which we paid for. All opinions are our own, as are the gigantic amounts of fun we had on this truly wonderful holiday. 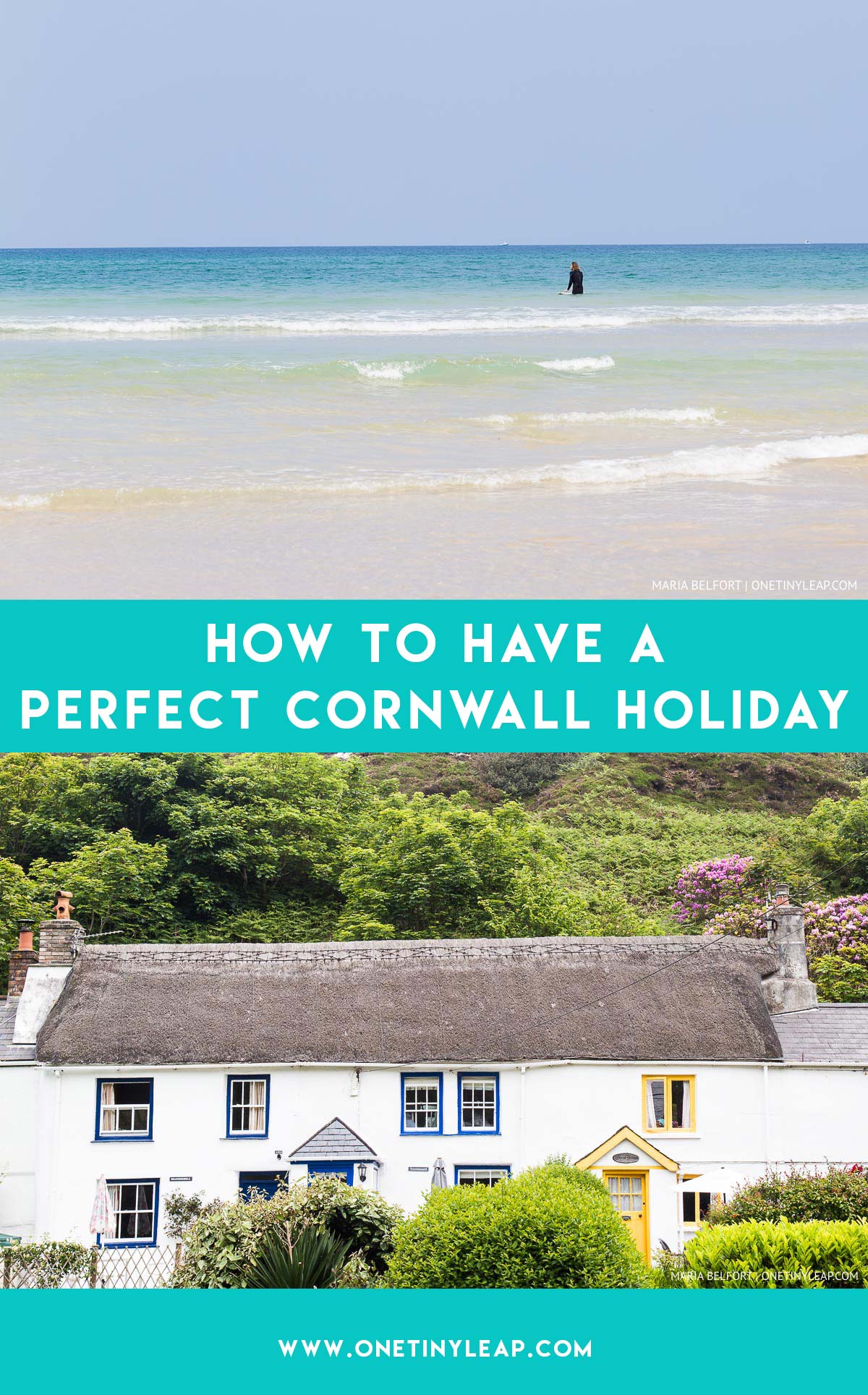 We had the most surprisingly exotic holiday in Cornwall, the waters crystal clear resembling the caribbean and we found it incredibly hard to say goodbye and leave.

If you’d like to play a family holiday to Cornwall of your own, keep your eyes peeled as there are a few more posts coming soon!

once upon a time, we met the gruffalo

A family weekend in Sussex with Vauxhall Combo...