A couple of weeks ago, while Rob was reading the Portuguese ‘Sábado’ magazine something caught his eye … an ad for the island archipelago of the Berlengas. He started bombarding me with questions about it, only to hear silence on my end…  despite its proximity to Lisbon, I’d never actually been.

So the following Saturday, having checked the weather forecast and boat transfer times, we took to the road. The Berlengas are reached by boat from Peniche, which is an easy 45-60 minute drive from Lisbon (more details below). The enigmatic nature reserve is one of Portugal’s most beautiful, but unvisited places, a well-kept secret.

I wondered why I never went as a child, and why it so frequently overlooked as a destination for Portuguese people. 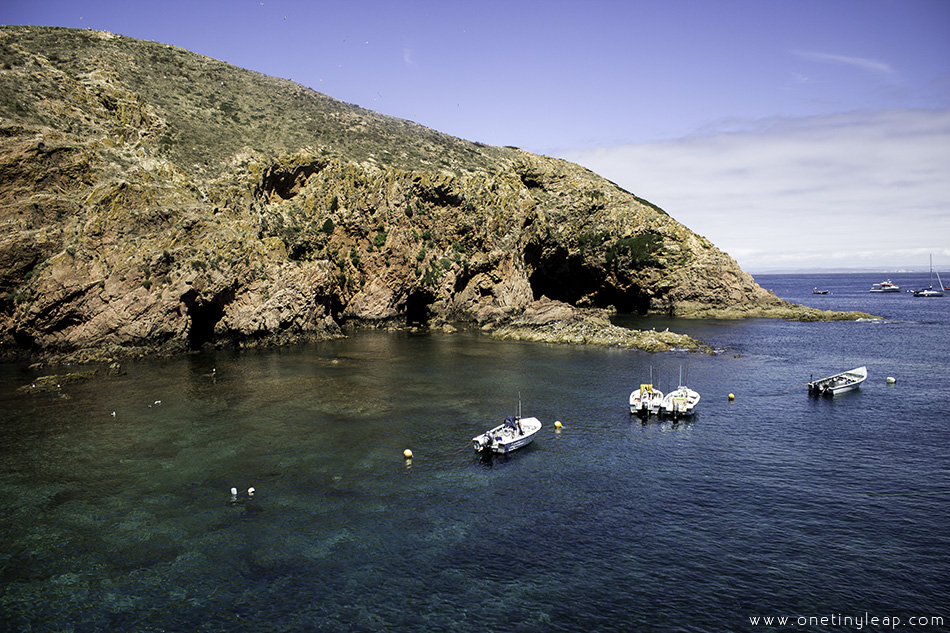 HOW TO GET TO BERLENGAS

The Berlengas’ translucent waters, rocky landscapes and hundreds of cliff-dwelling seagulls are a fairly short boat journey away from the popular, yet not very attractive, fishing port of Peniche.

I had a quick look online before we set off and found out that there were 2 crossings a day, and the last one was at 11.30am. We arrived with a good 30 minutes to spare, but were a little confused as there were several tourist offices selling boat trips.

The weather was looking gloomy and foggy despite forecasts of sun when I checked earlier in the week, and the sea was pretty choppy. We debated whether to come back on another, nicer weekend day, and go and visit somewhere else in the area instead. Luckily, I started talking to a couple of the boat company reps to find out  if crossings would happen if the sea was this rough, and I eventually found a boat that could take us and as it turned out, a much better option than the mini ferry boat we’d looked at.

We ended up on a Zebro boat ride over to the island, which only takes 20 minutes, slicing a whopping 30 minutes from the usual journey time. Essentially it’s a large rigid inflatable. It went at a fantastic pace over the waves, and we all, Charlie especially, loved a bouncy, fun crossing. 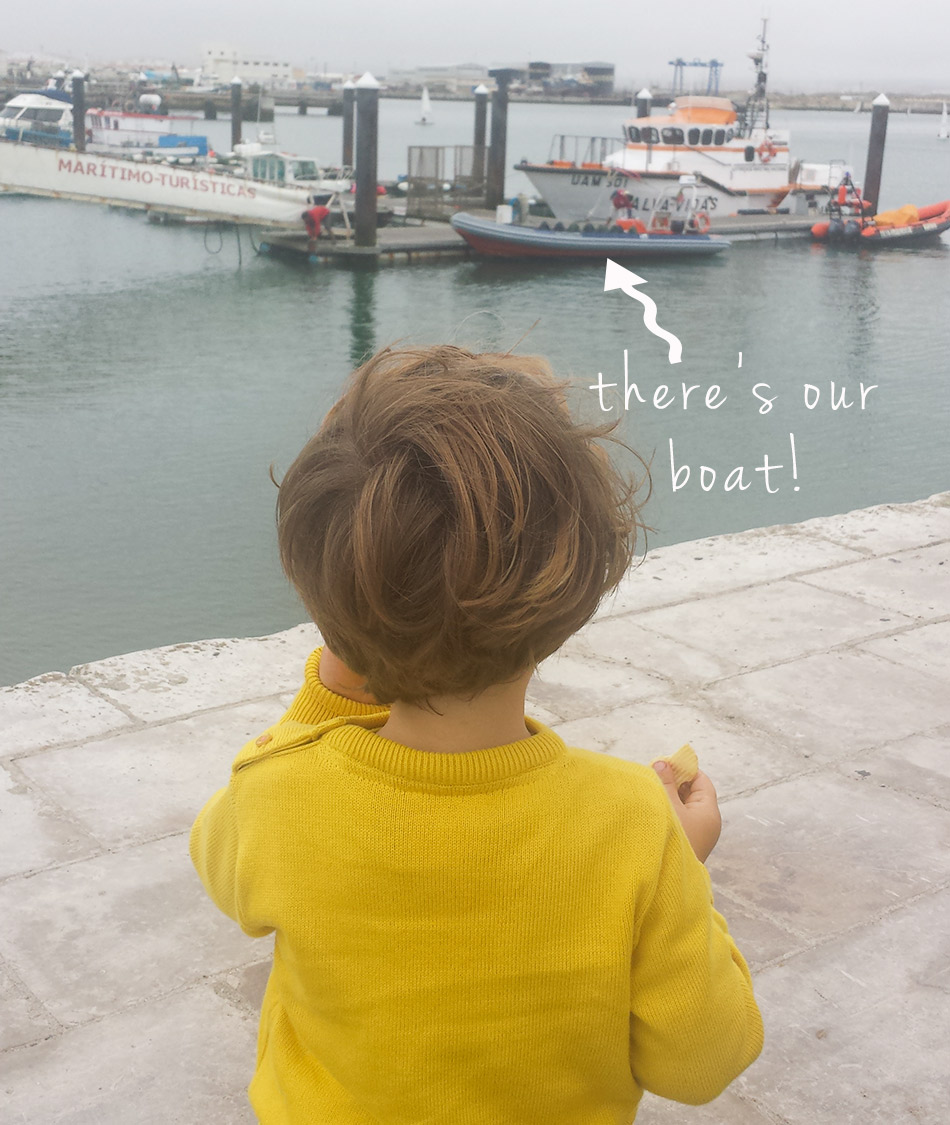 As you brave the wild waters, you begin to see a large rock emerging on the horizon, surrounded by the dark deep waters of the Atlantic that crash against its rugged coastline. This is the main island – Berlenga.

The boats drop passengers off by some worn steps, not a real port/jetty, which I think gives it a special touch of adventure. From here you can see the island’s only beach tucked away under some enormous cliffs and a slightly steep hill taking you on a small trek to an old fort (a must-visit).

We were chatting with the boat’s driver, and he suggested that we visit the caves. We agreed, and after an hour spent splashing and picnicking on the beach we set off. 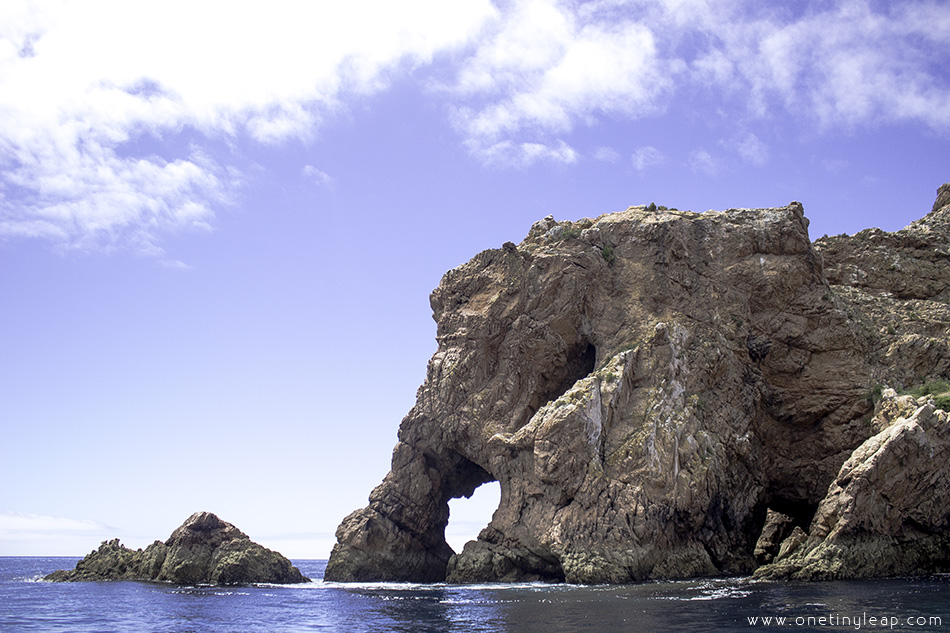 The caves boat trip was short and fairly interesting, but we could’ve easily done without it and probably wouldn’t really recommend unless you’re mad about caves. The boat did have a glass-bottom though which was endless fun for Charlie. 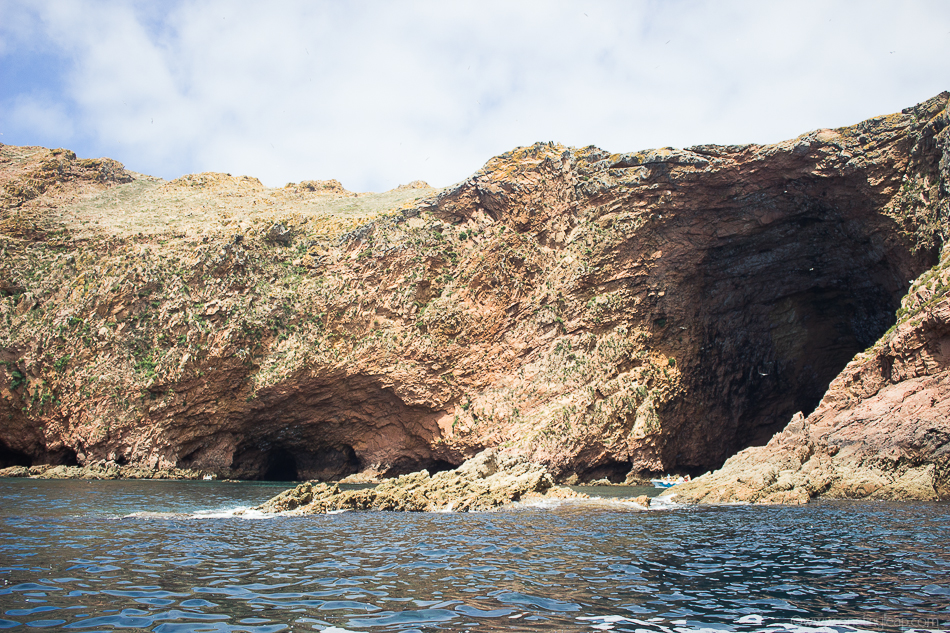 We got dropped off at the 16th century Fort of São João Baptista das Berlengas. Getting off the boat we realised we’d left Charlie’s shoes at the beach and now we had to carry him up the hill on the trek from the fort back to the beach- FAIL. 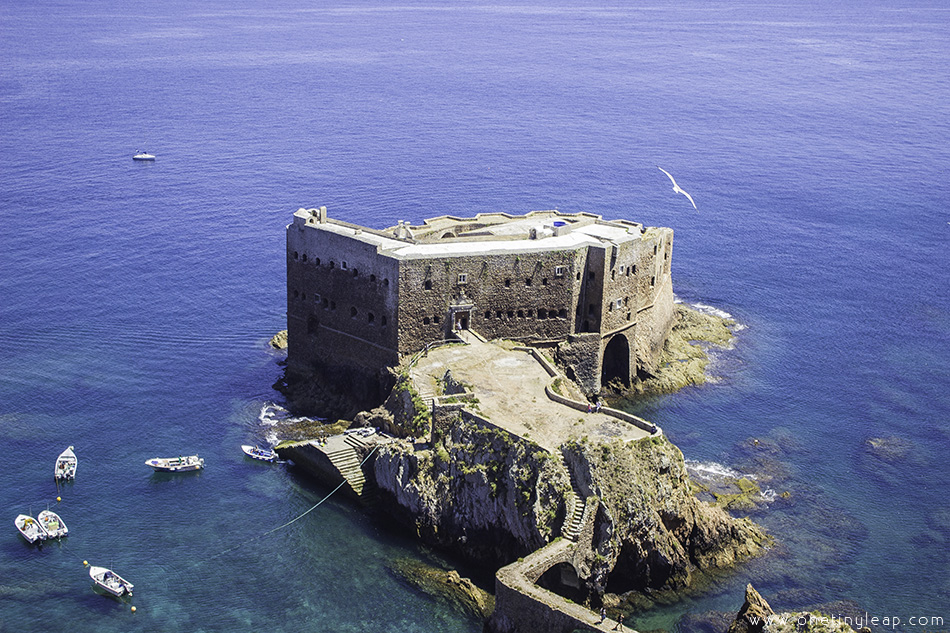 The fort was stunning. A well-preserved structure that repelled several pirate attacks, it is now a surfers hangout with a cafe inside. After visiting the interior briefly, with a bit of information about the archipelago’s resident wildlife, we climbed up a moderately steep hill to find a truly breath-taking view – you can gaze over the Atlantic, watching it stretch as far as your eyes can see. 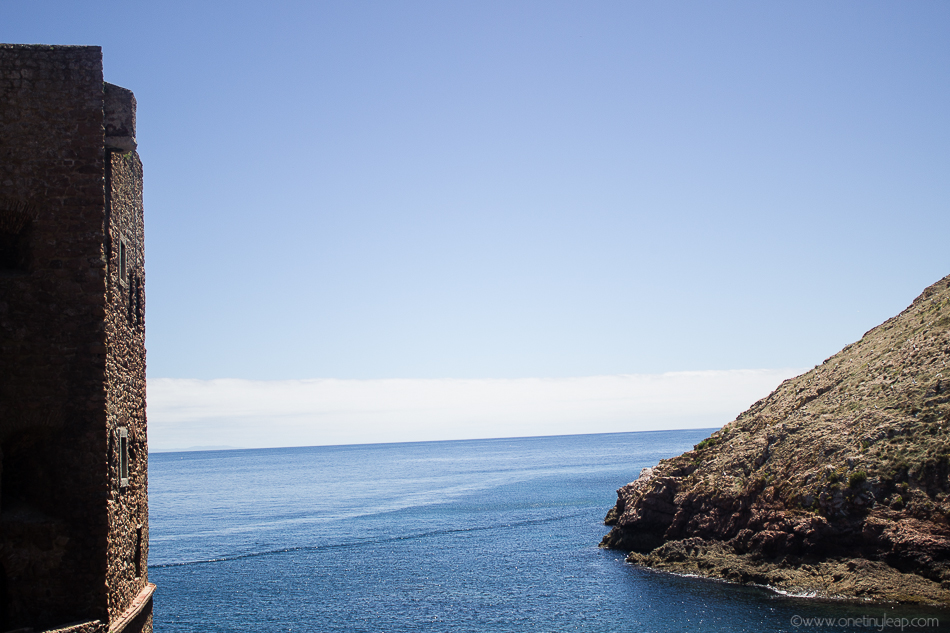 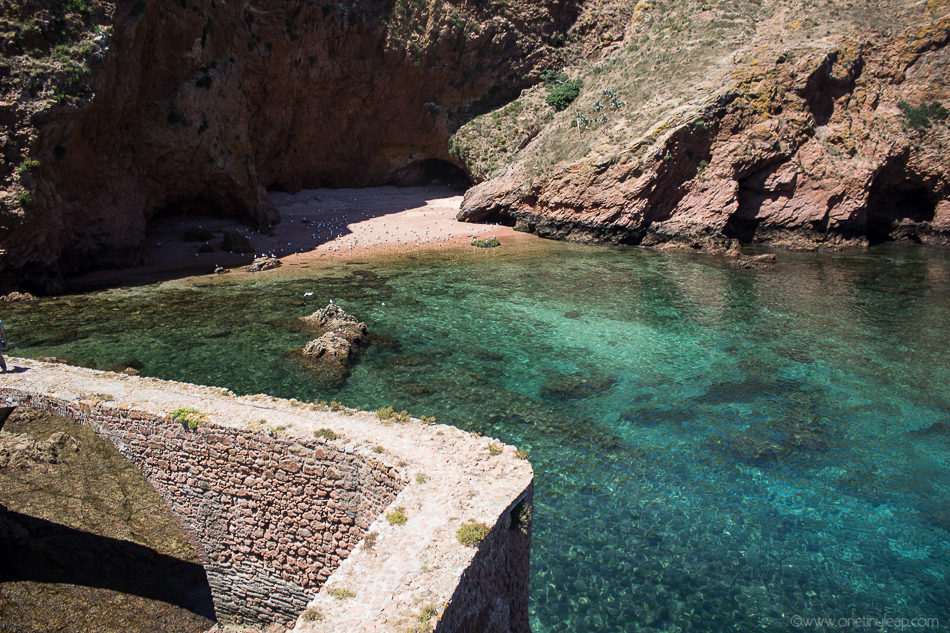 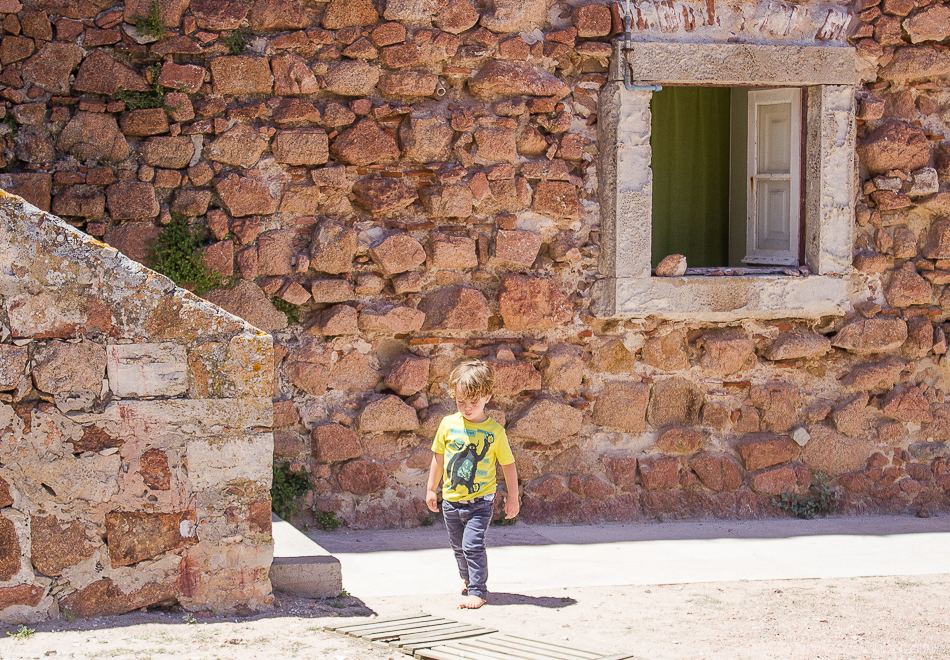 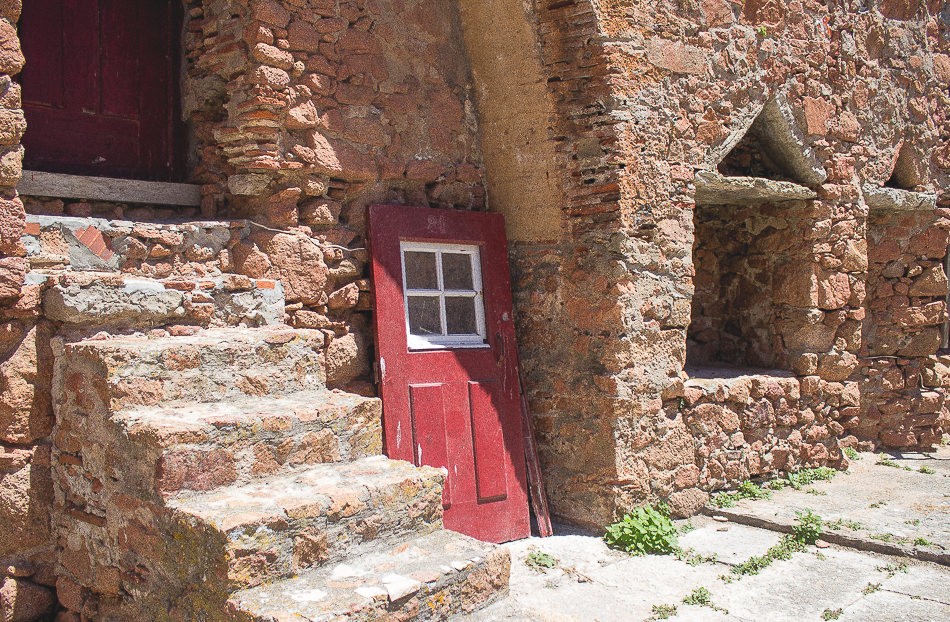 From here it’s a short and scenic walk back down to the beach, via a small campsite and some shops selling ice-cream, during which you can observe the hundreds of seagulls living here. 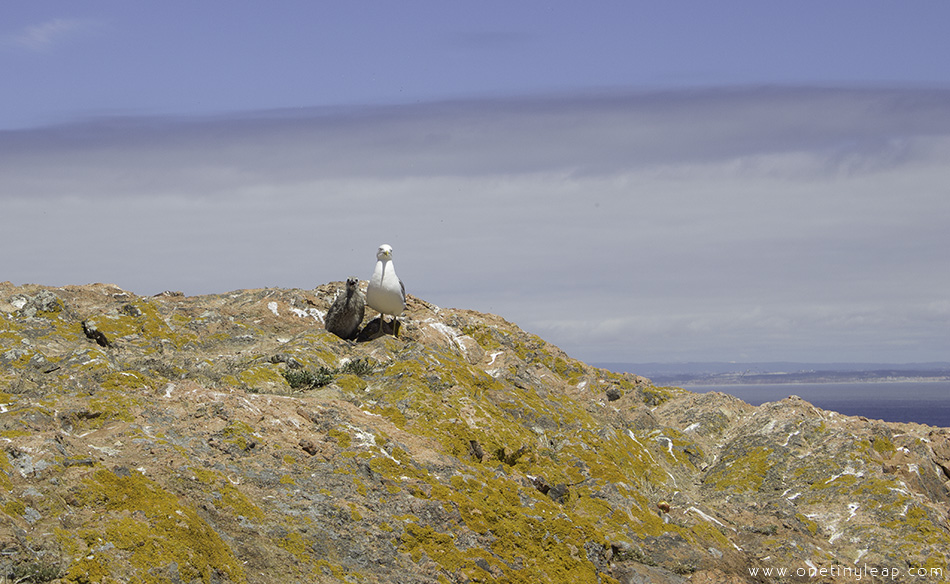 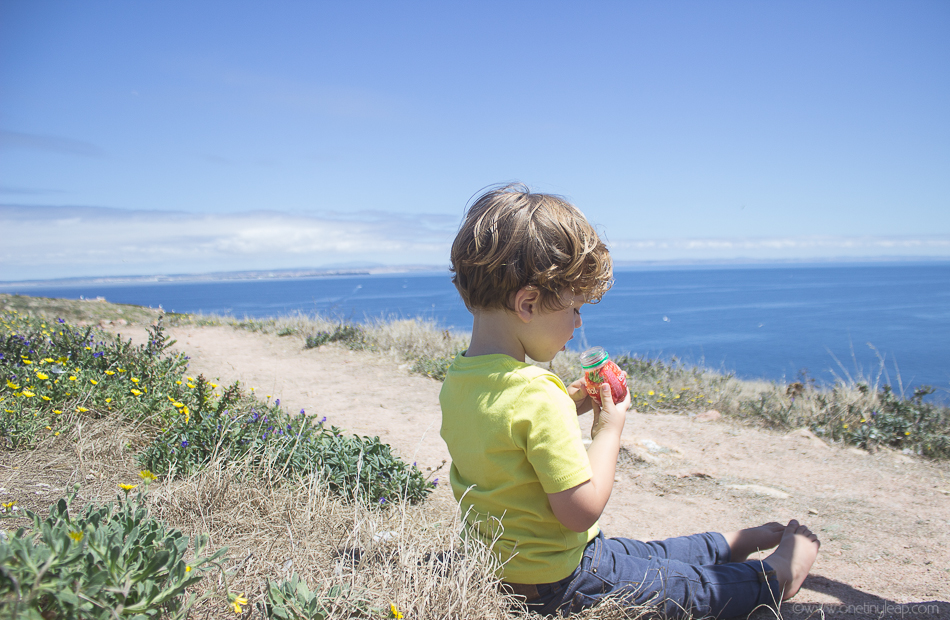 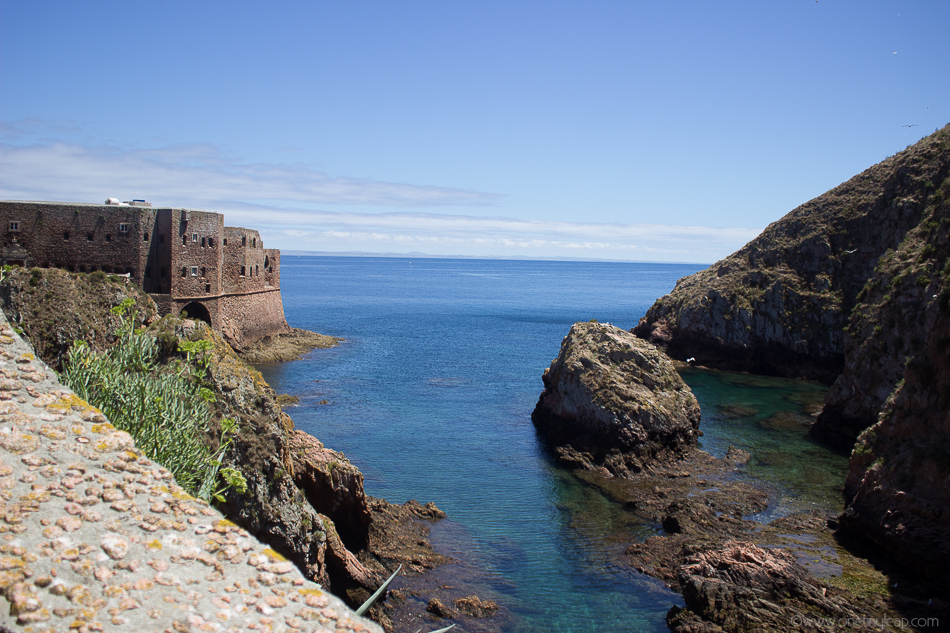 We spent the rest of the afternoon relaxing on the sandy beach, swimming in the crystal clear waters and doing some semi-snorkelling (you can rent all the equipment on the island).

There are barely any waves, which was fantastic for Charlie who was happy playing around tossing pebbles in the sea, jumping in and seeing the fishes (slight disappointment in not finding Nemo)! 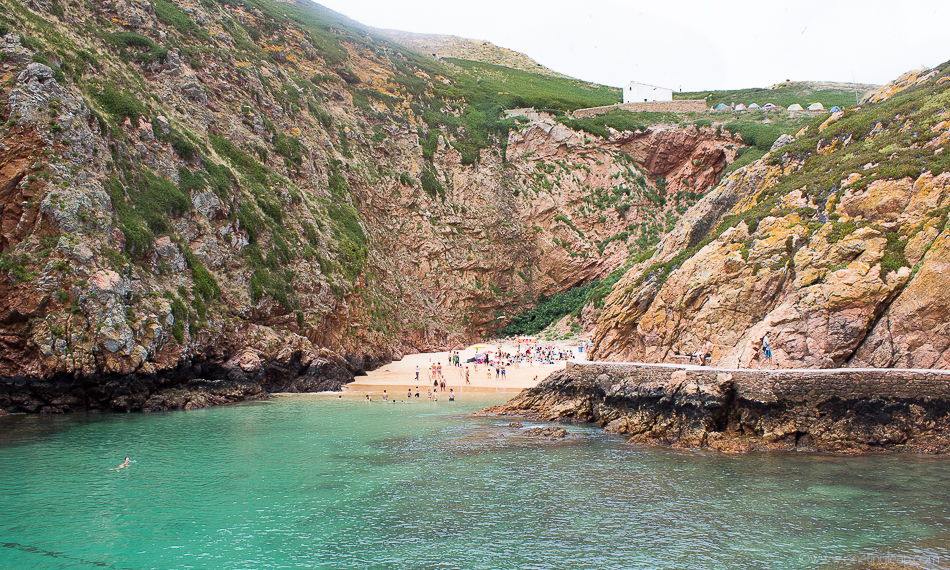 So why don’t more people visit? The boat crossing can be a bit rough, especially if you experience seasickness easily, and it’s also not cheap; the beach is small so it gets crowded quickly; and I doubt the summertime campers appreciated the seagull population (their tents were covered in poop). It’s a shame, because we loved our day trip to the Berlengas and would jump at the opportunity to visit again. If you’re staying in Lisbon for longer than a weekend, I think it’s definitely worth the trip to witness the sheer beauty the island has to offer.

Families visiting the Berlenga island should be aware that it’s not buggy friendly, but the trek is perfectly fine for a parent carrying a baby/toddler in a baby carrier. It’s a 15-20 uphill walk, usually on stone steps or path. The cafés are a bit overpriced and the food isn’t the best, so we recommend a packed lunch to be devoured at the top of the island.

WHERE ARE THE BERLENGAS

Roughly an hour’s drive from Lisbon, an easy motorway drive takes you to Peniche. After a couple of roundabouts, you’ll find the sign for Berlengas (embarcacoes) and a few minutes later you’ll arrive at the car park where the boat reps wait.

FROM PENICHE TO BERLENGA ISLAND

We took the Zebro boat ride, which cost us €22 each (Charlie paid too). It was an expensive ride, which is why I think a lot of people don’t even consider going. Get there early to make the most of your trip, and choose the type of boat you’d like to go in (the longer ferry ride which can be rougher is slightly less expensive at €20 per person).

Have you been to the Berlenga island? What did you make of it?

Finding the hidden playgrounds in Lisbon’s most beautiful...