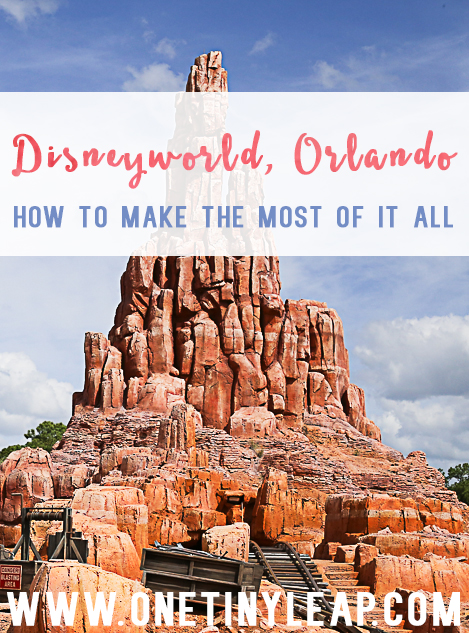 I have loved Disney since I can remember it, and Disney always brings back the most magical memories. I am a big kid at heart and mind, and Disney is my happy place.

I have been to the Paris park at least a dozen times (I used to work with them, so got to visit frequently), but I always dreamed to see just how big and wonderful the Magic Kingdom was, after all this is where it all started.

We were in Orlando for just a few days, so put a lot of effort into choosing which parks we wanted to visit to make the most of our weekend in Disneyworld. C had gone to Disneyland, Paris when he was just 2 years old, and now that he had fallen in love with the Disney characters like I had at his age, I knew he’d love it.

We chose the Magic Kingdom as  our main park, and because our budget only allowed for one more day we decided to break-up the type of fun by up going to Disney’s waterpark – Typhoon Lagoon, which was 50% less expensive than a park ticket.

I had done extensive research trying to find the best deals for Disneyworld tickets, but found that buying them at the park entrance is actually the most cost-effective way. In order to beat the queues on the day, we arrived at the Magic Kingdom just before the park doors opened and surprisingly enough purchased our tickets without any hassle or queues.

It takes just under an hour between parking the car at the parking lot, taking the train to the ferry/monorail and actually getting to the park, so keep that in mind when planning your day. We chose to take the ferry for an extra special touch, and it sure built up the expectation of my already excited boy! 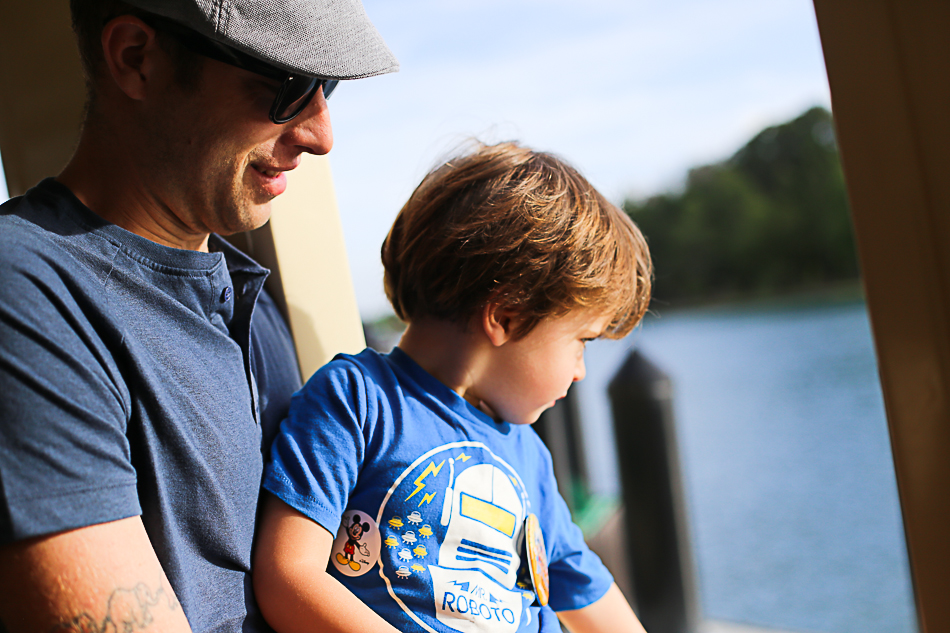 Arriving at Disneyworld is always an incredible experience, and never fails to put a smile on my face. By the time we arrived at Main Street, I had researched the map and based on my Paris experience, knew how I’d want to explore the park to make the most of our day.

Fantasyland is usually the busiest in the mornings, as it’s the one little ones prefer to go to first, and having a Toy Story fan, we knew our first stop should be Tomorrowland! It’s hardly the most interesting or fun area of the Magic Kingdom, but it was a hit with our Buzz fan.

Unsurprisingly we started off with Buzz Lightyear’s Space Ranger Spin, which turned out to be his favourite ride from the whole park. Being immersed in a Buzz mission was super fun, and we ended up going four times, with Rob’s epic laser skills turning him into a fully fledged Space Ranger!

The queue was only 5 minutes for the nearby Astro Orbiter, so we made a dash for it and jumped on board for another space adventure – it was really good fun flying at a steady speed looking over the park. A small, but worthy ride. 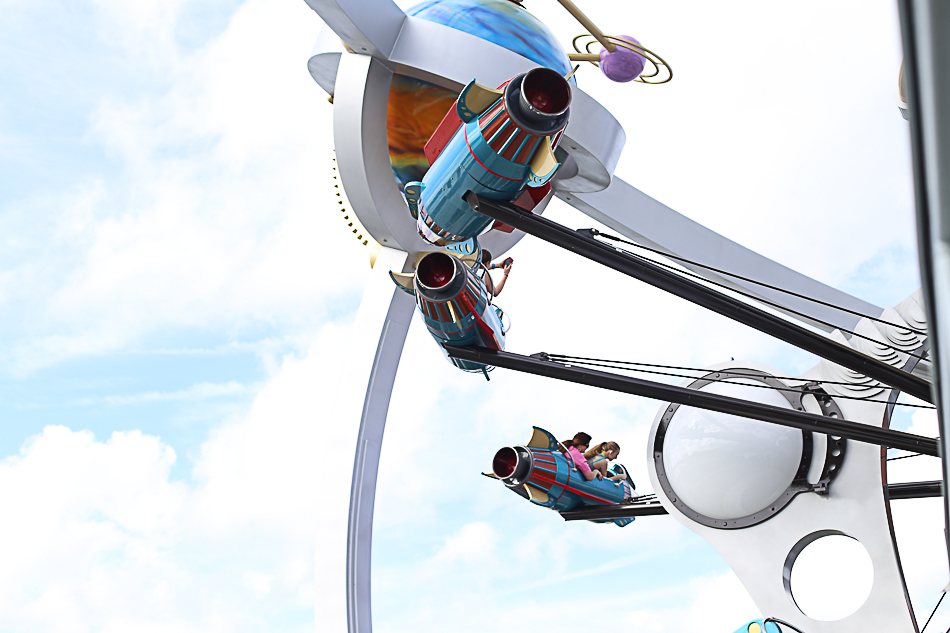 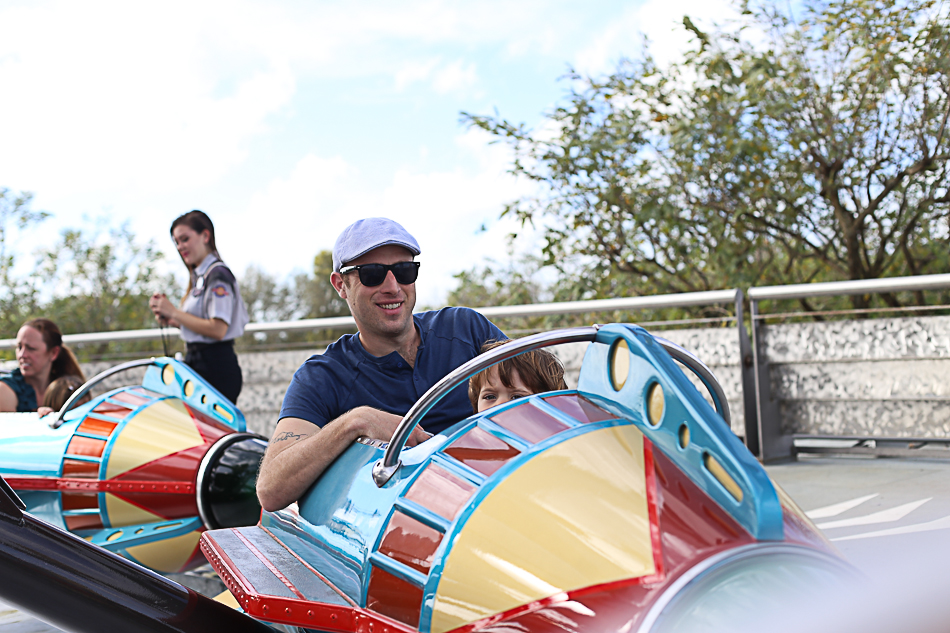 Then it was time for C to put on his racing gear, and go behind the wheel at Tomorrowland’s Speedway – watch out everyone, there’s a space ranger on the track! He really loved driving his own car. 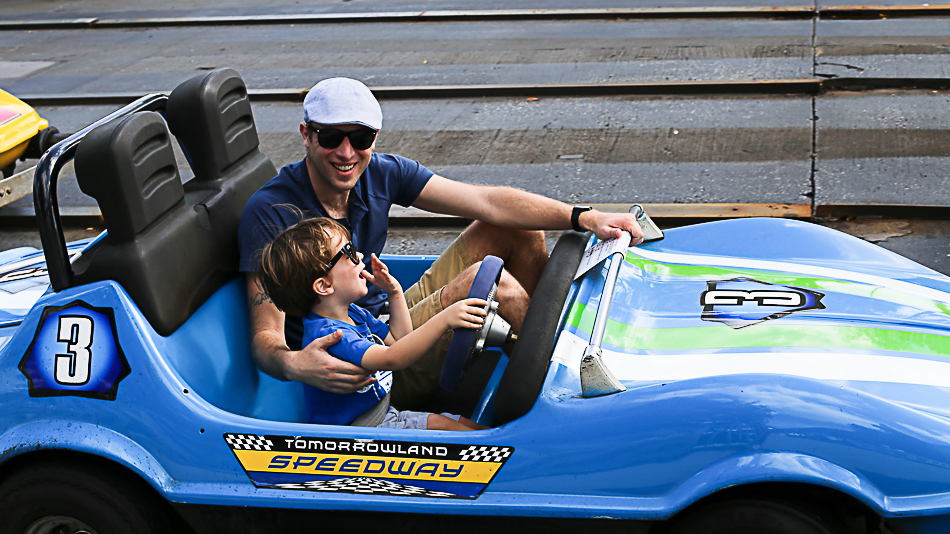 After our trip to space in Tomorrowland, it was time for mummy to get her Disney-on and pop over to Fantasyland, where all your cheesy dreams come true. The music being softly played is as magical as the first time you watched Sleeping Beauty singing in the forest, and there seems to always be a character wandering around the area – perfect for little ones. It is also where you can go on the Carousel, a ride that never gets old! 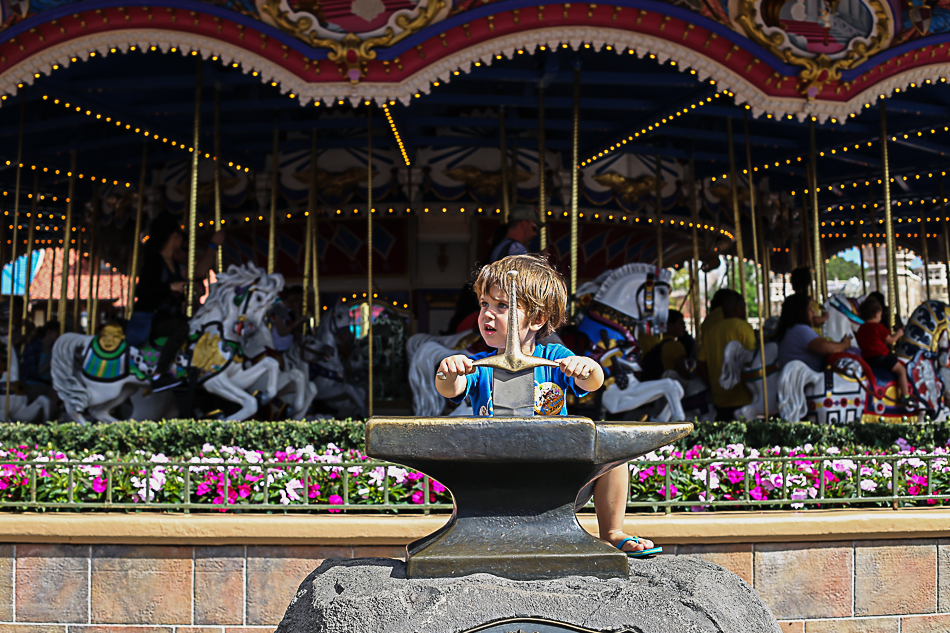 Then it was time to move on to more dangerous ground – Frontierland! C loves rollercoasters, so we always go to as many as he’s allowed to go on. Luckily for him, he’s pretty tall for his age, which means he gets to ride some of the bigger kids’ rides, like the Big Thunder Mountain (seriously, watch the video below – his laugh is infectious!). 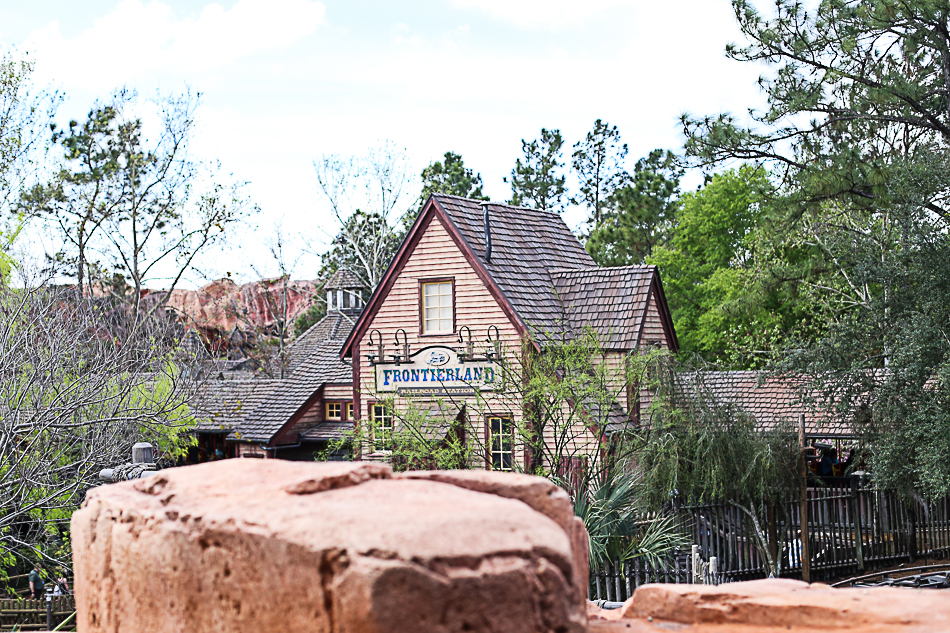 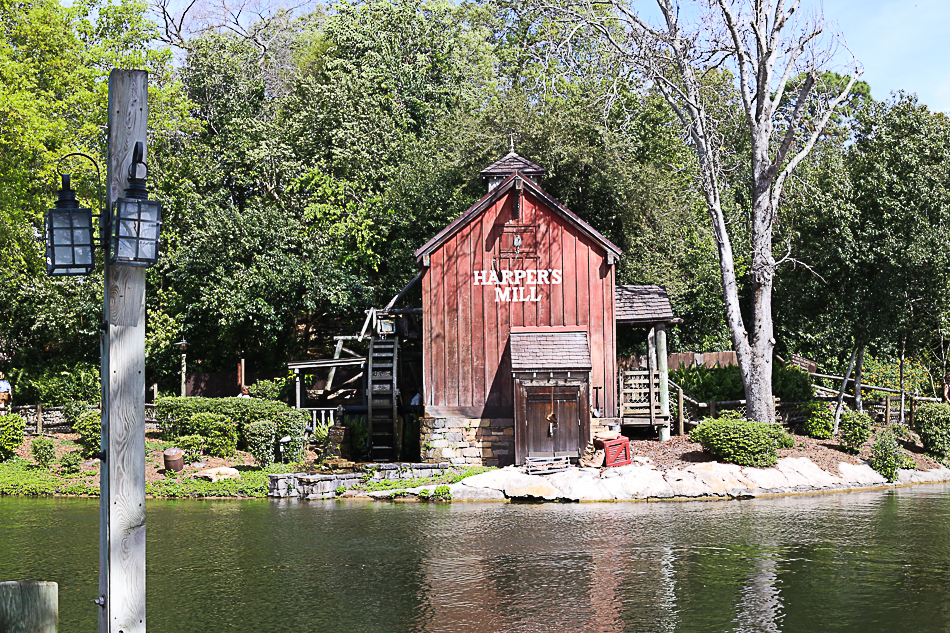 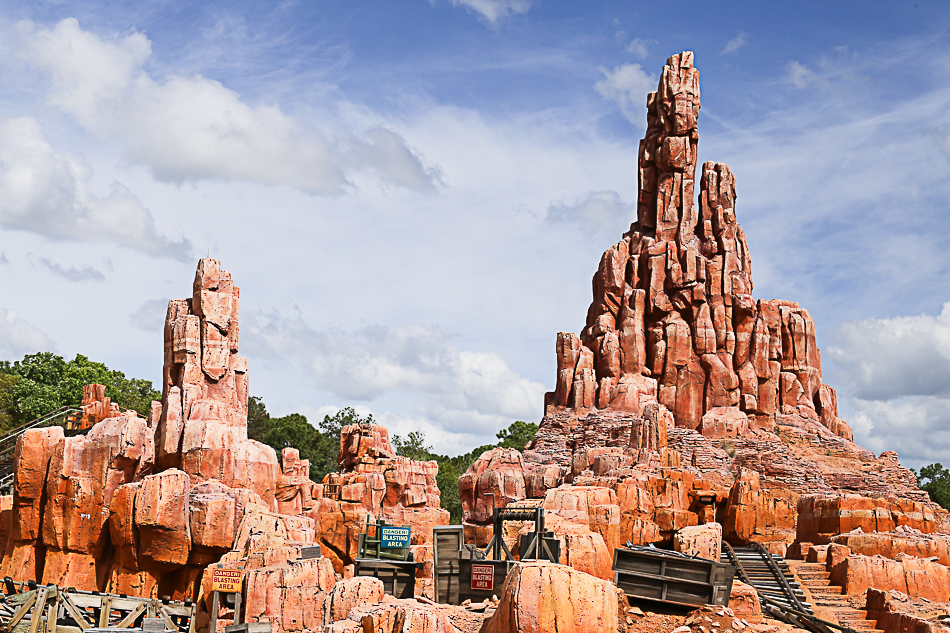 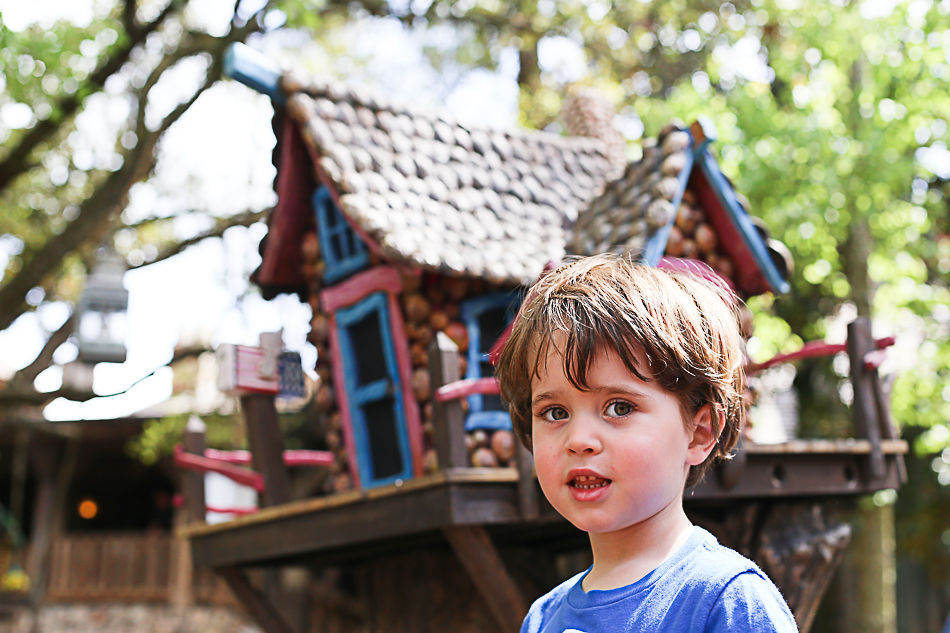 After getting our thrills on the coasters, we had a pretty chilled out afternoon on the Swiss Family Robinson’s treehouse, and Rob’s favourite – Tom Sawyer’s island. C loved the freedom of being able to run around without me freaking out, climbing and running over suspended bridges. 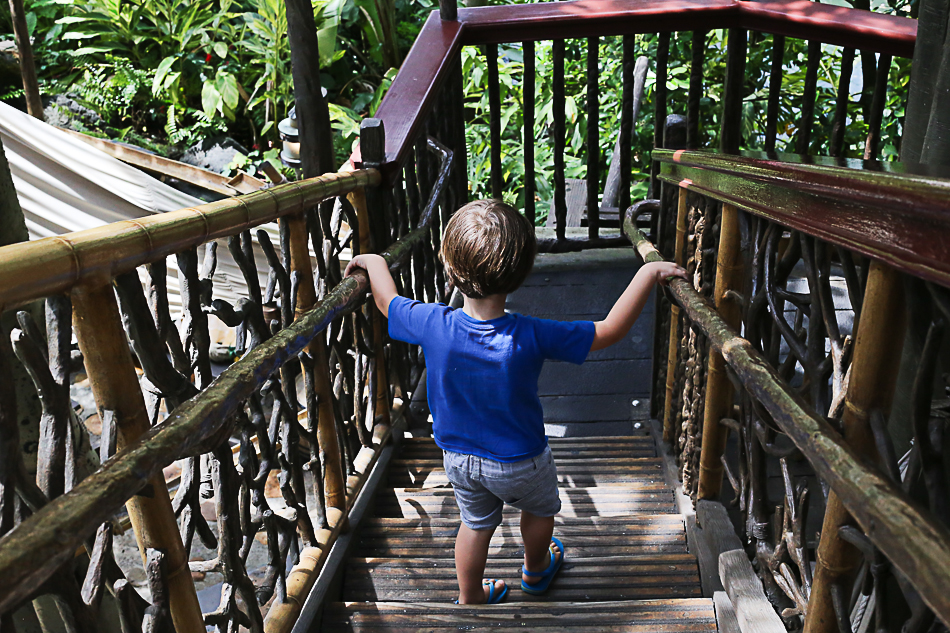 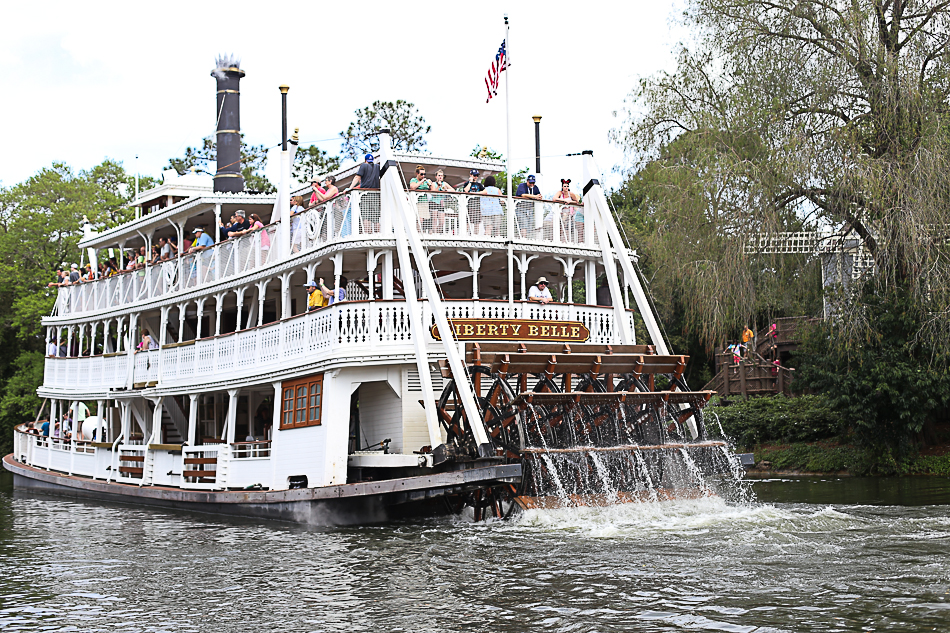 After a bite to eat (bring your lunch for a healthy snack), we made our way back to Buzz’s ride, and that’s when the highlight of the day happened: C met Buzz, which is probably among the best moment of his life so far. And he didn’t go all giddy like I did when I met some of my fave musicians when I was younger. No, he was a cool dude, gave him a hi-five and posed like a good boy (this never normally happens – he must have been stunned). And then, then Buzz gave him a cuddle…. It was an amazing moment, that alone made the nearly $300 we paid for the tickets worth it (I feel slight sick at writing that). 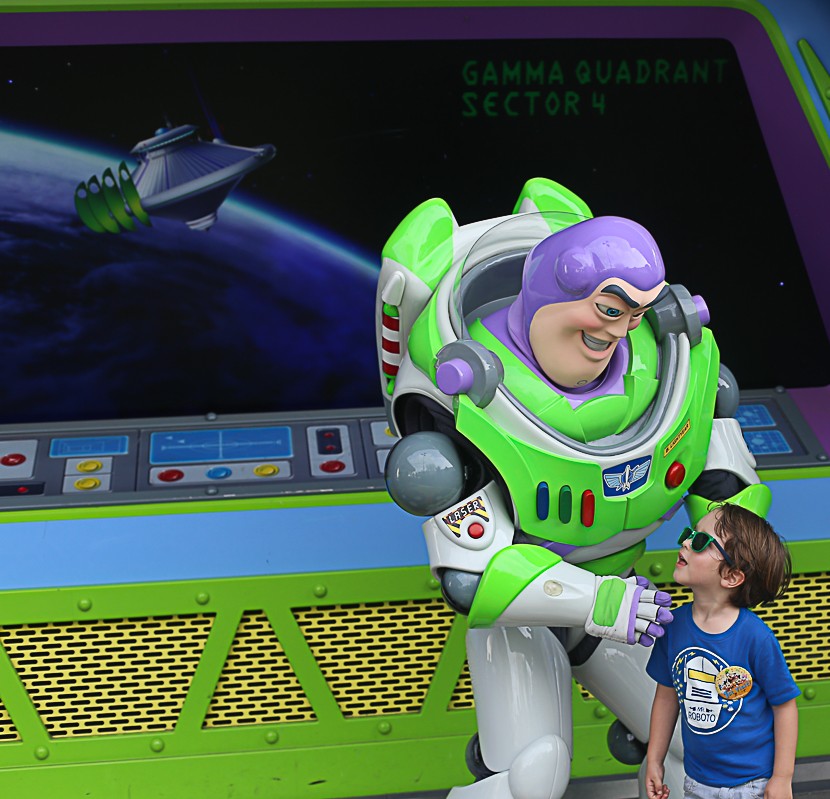 After a full day of fun and no naps, we were ready to go home at 10pm, and luckily even managed to catch a few fireworks as we waved goodbye to the Magic Kingdom. A wonderful day, full of memories that will undoubtedly last a lifetime.

Have you been to Disneyworld Orlando? Which was your favourite park?

Why you MUST visit Chattanooga

Manatee springs: off the beaten track in central...