Utah wasn’t part of our original itinerary, we didn’t know a whole lot about it before we arrived in the States, other than its Mormon history. But when our friends were on their own US roadtrip earlier in the year they shared some incredible photos of the Arches National Park and we felt compelled to take another look at our itinerary and see if we could get there.

Luckily we had just over an extra week between staying in the tiny rural community of Tensleep in the Bighorn Mountains and Yellowstone National Park, so we booked some of our regular campsite cabins, and made our way to Moab, Utah, not knowing what to expect really apart from the enormous and spectacular Delicate Arch.

That naivety was probably a good thing, as we were completely overwhelmed by the whole experience. After driving through the hot, dry desert of South-East Wyoming and Northern Colorado, the landscape became steadily more stunning, evolving into rich red mountains as we approached Moab. 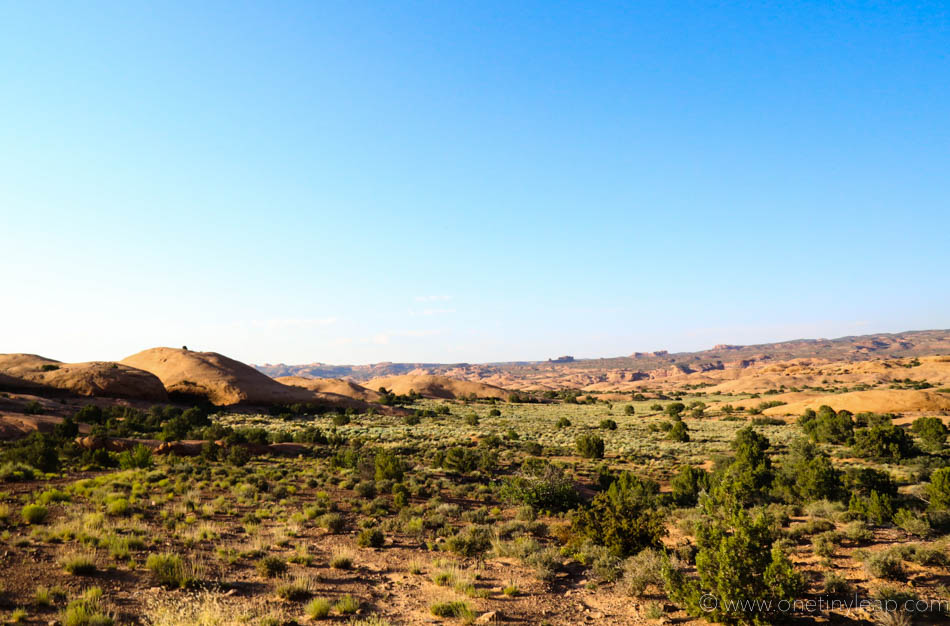 We arrived late afternoon, but with enough time to explore Moab itself. The place is a dream. The perfect example of a ‘resort’ town that hasn’t been ruined by over-development and mass tourism. Yes it’s influenced to an extent by the thousands who visit every year, but I suspect because it is host to adventurous, adrenalin-junkies and outdoorsy folk it has remained an incredibly relaxed, welcoming and fun place to be.

Unfortunately for us we were in the desert while the US saw its hottest week of the year, and most days the temperature hit 106/107f  which was completely unbearable for us. However we were staying in a great campsite (KOA, as always) with one of the best pools we’ve had so far. Not being early morning people, we missed out on the 7am hikes other more awake people did, so we spent our mornings at the pool, afternoons sleeping off the heat, and exploring the area after 7pm only (it was still about 102 even then!).

Because of the heat, C was unusually grumpy and absolutely not in the mood for doing any short hikes, which was a massive shame. He is also still too small and young for the more adventurous trips like rafting/ATV/mountain biking so we had to miss out on those too. We were pretty disappointed and have vowed to return when he turns 10. For Summer 2021, One Tiny Leap will return to Moab – watch this space.

But we did manage one adventure – a Hummer Safari along an infamous stretch of rock known as the Devil’s Backbone, which blew us away. Some of our Facebook and Instagram followers may have seen some photos from that evening, but they barely do it justice. 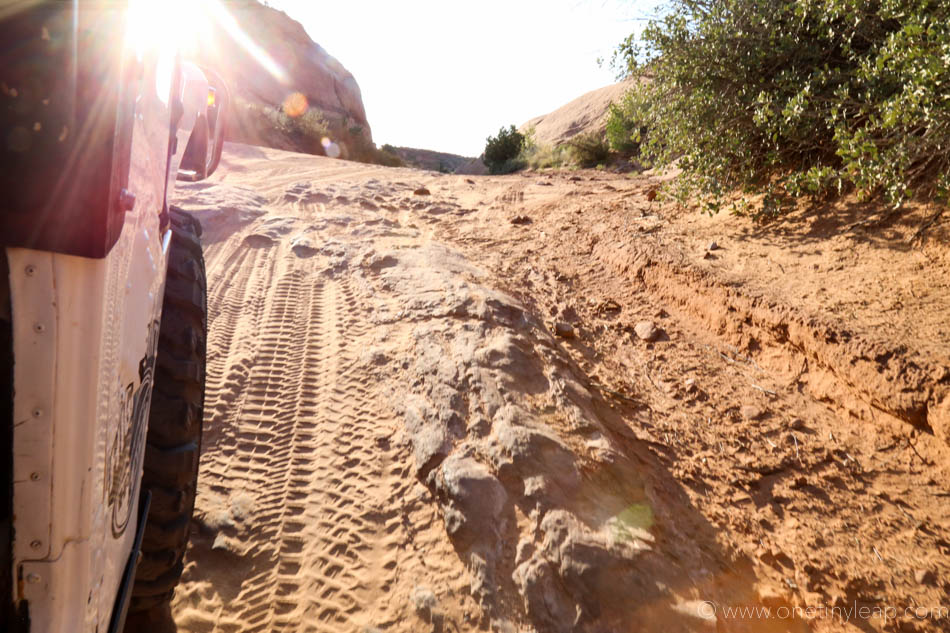 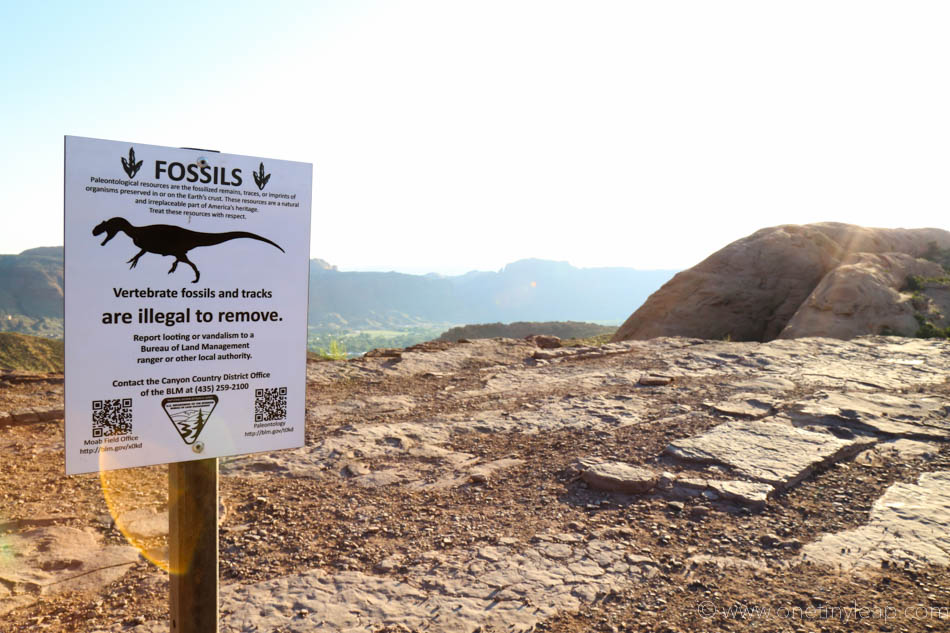 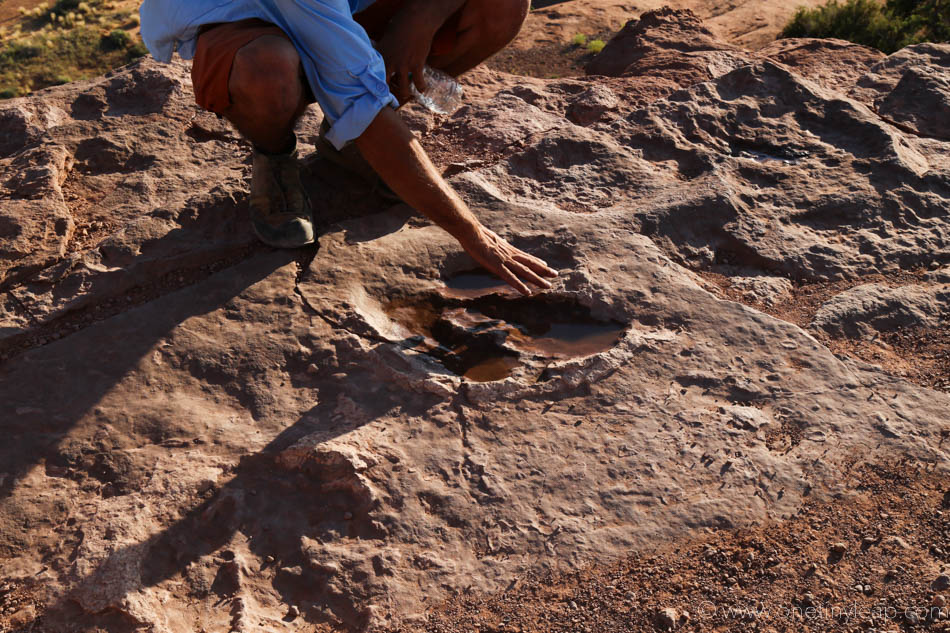 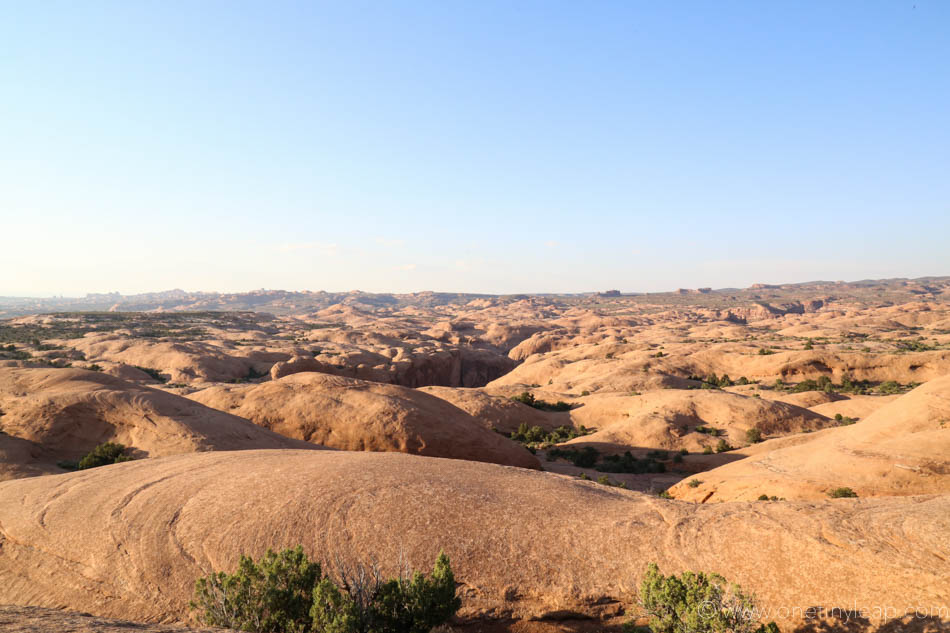 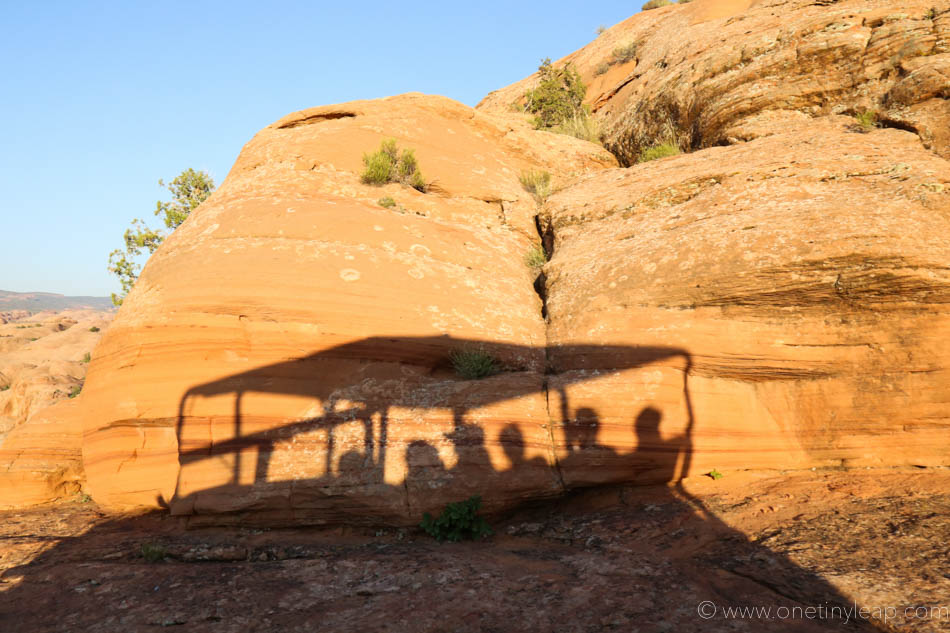 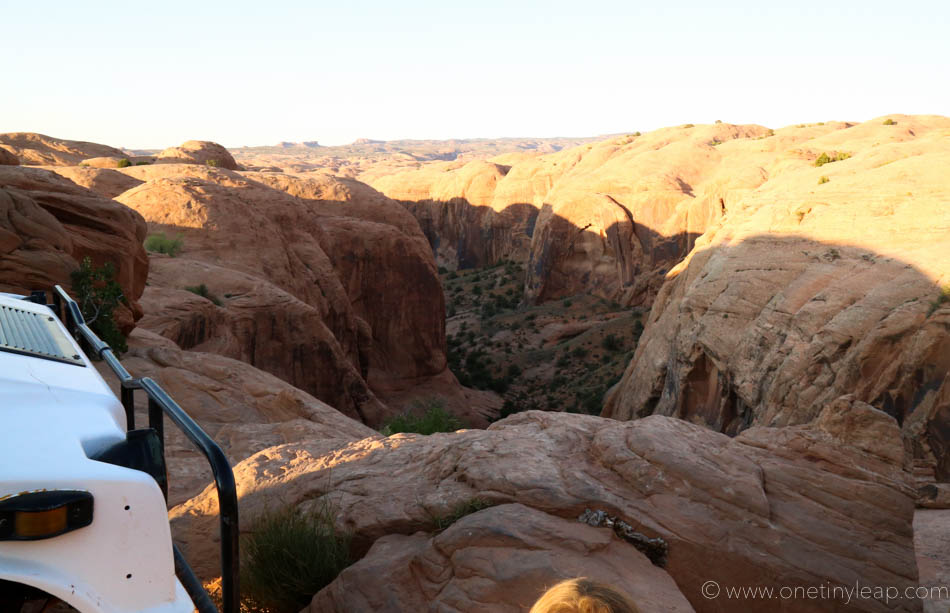 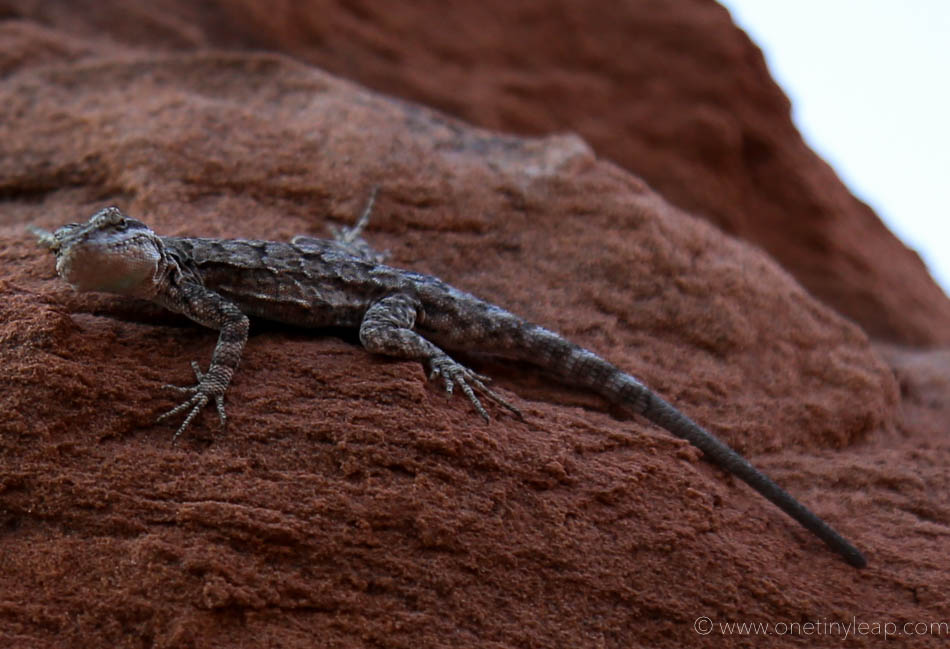 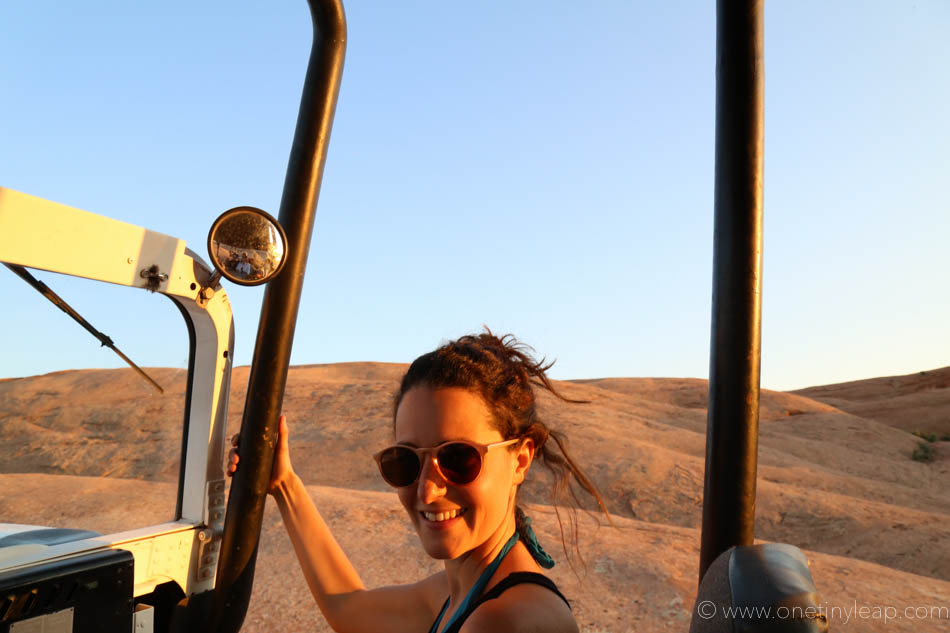 Because of the heat we chose the shorter trip, which was a 2 hour sunset tour. We expected a few bumps here and there, but our driver Dan made it the best fun we’ve had so far on our trip.

Utah was a dinosaur playground, and there are plenty of traces left behind here like footprints and lots of bones which Dan pointed out and talked to us about. We saw landscape that looked almost lunar, lythified sand creating the most insane rock-mountains, with very little vegetation around. That wasn’t the most amazing part though – that prize goes to the driving itself. We would squeeze between rocks with inches to spare, along flat surfaces with steep, sharp drops to either side, and at one point we drive up a 20-30ft rock at speed – backwards! Even massive rollercoaster fans like us were squeamish, but C took it all in his stride, in fact half the time he had his head buried in his favourite Octonauts book while Daddy screamed blue murder next to him. Kids, eh.

As if that wasn’t enough, after a while we ‘parked’ on the edge of a canyon and watched the sunset go down behind Arches National Park, its red light radiating over the orange/red hills around us, a sight and feeling of awe that I’ll no doubt remember forever. 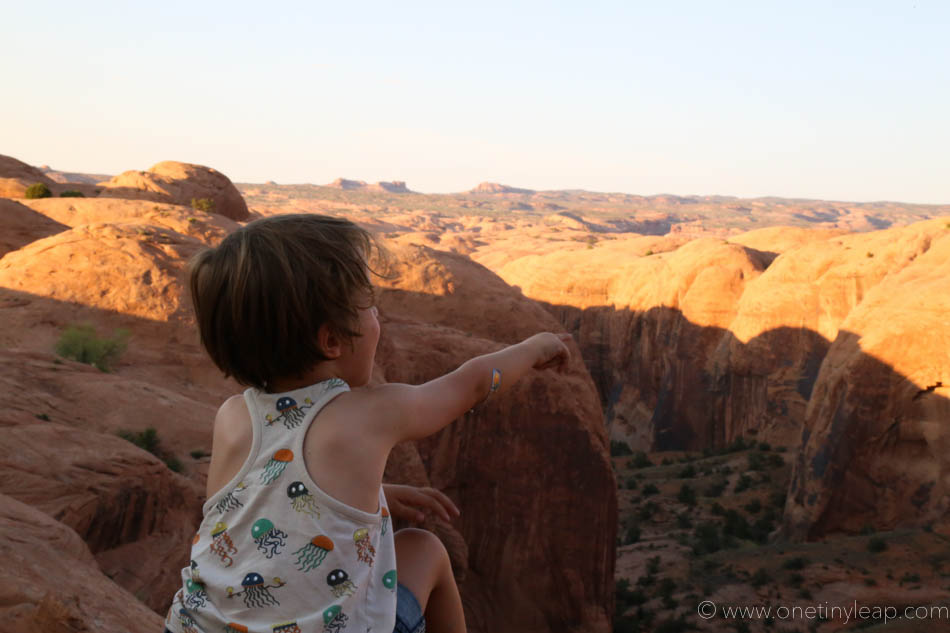 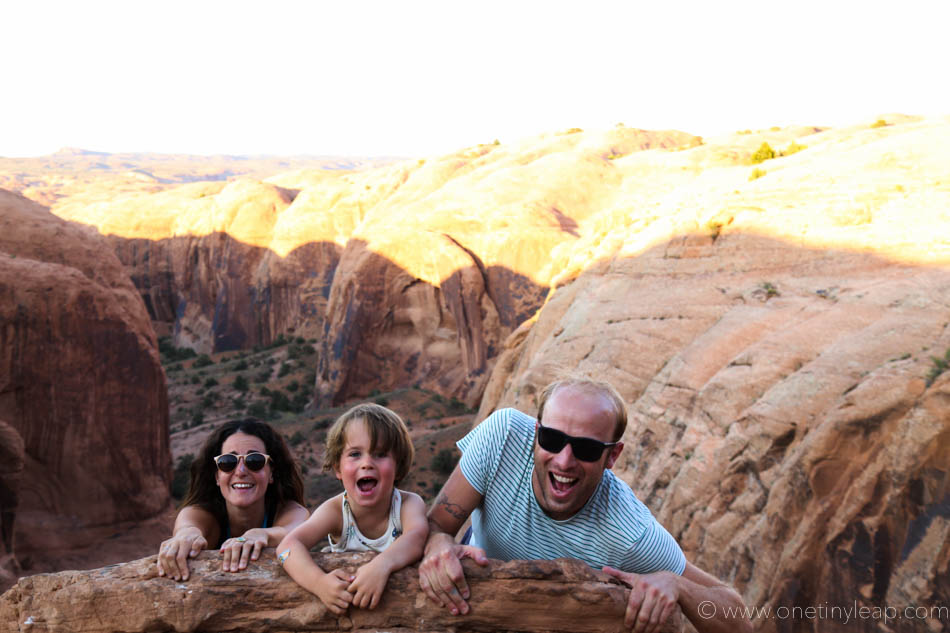 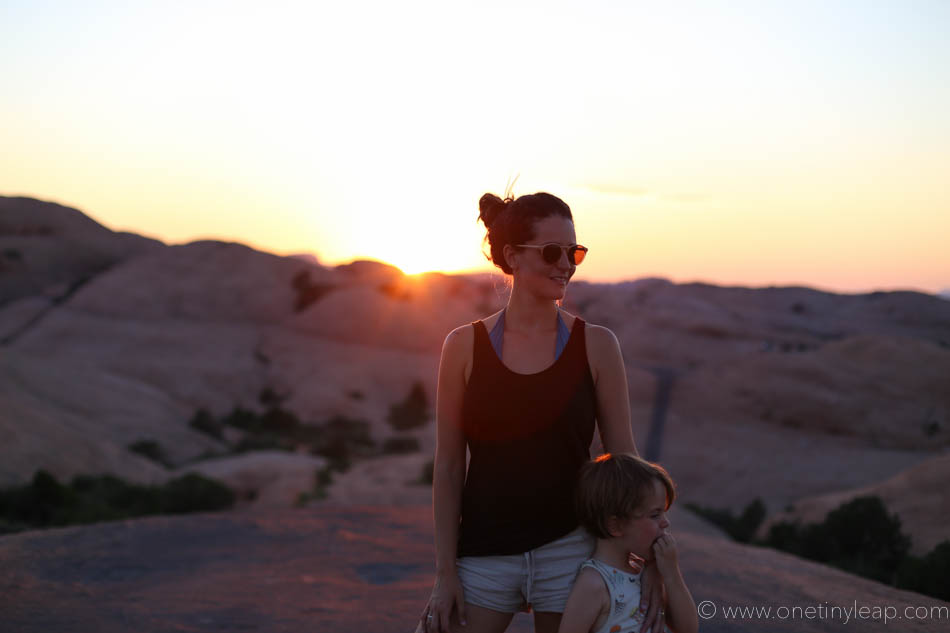 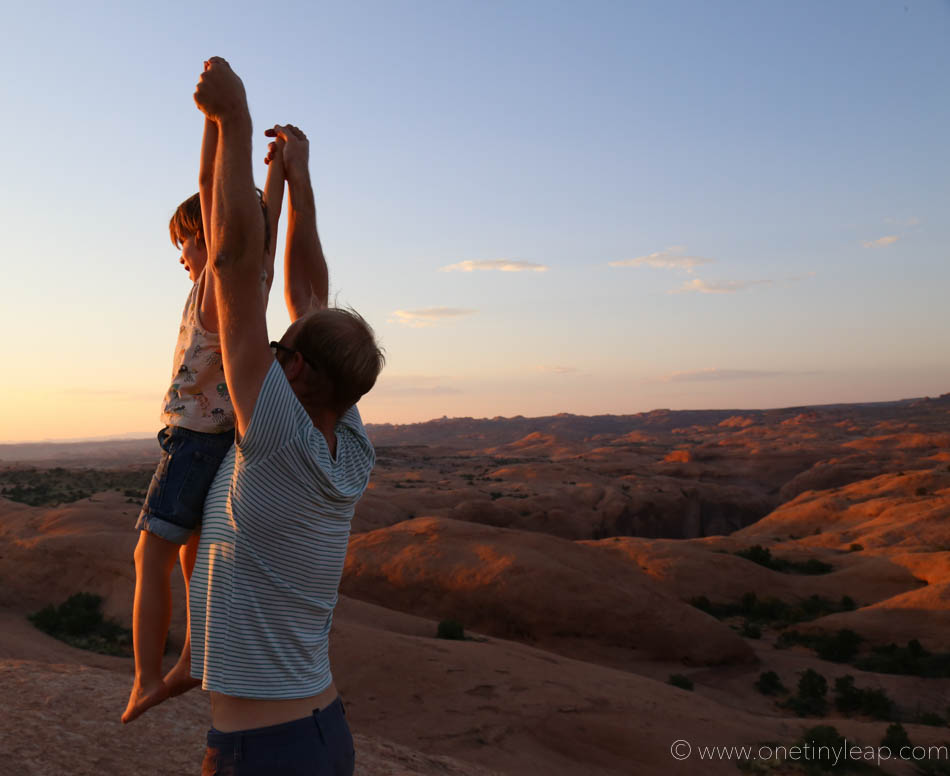 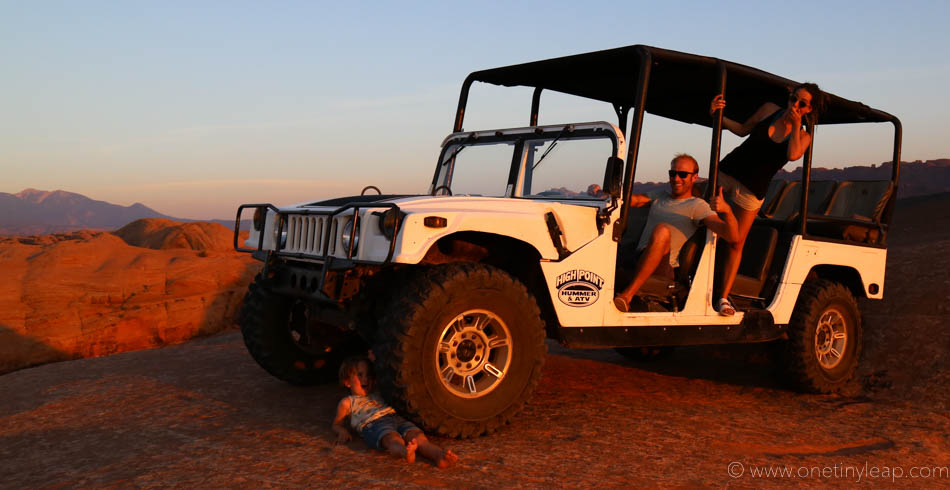 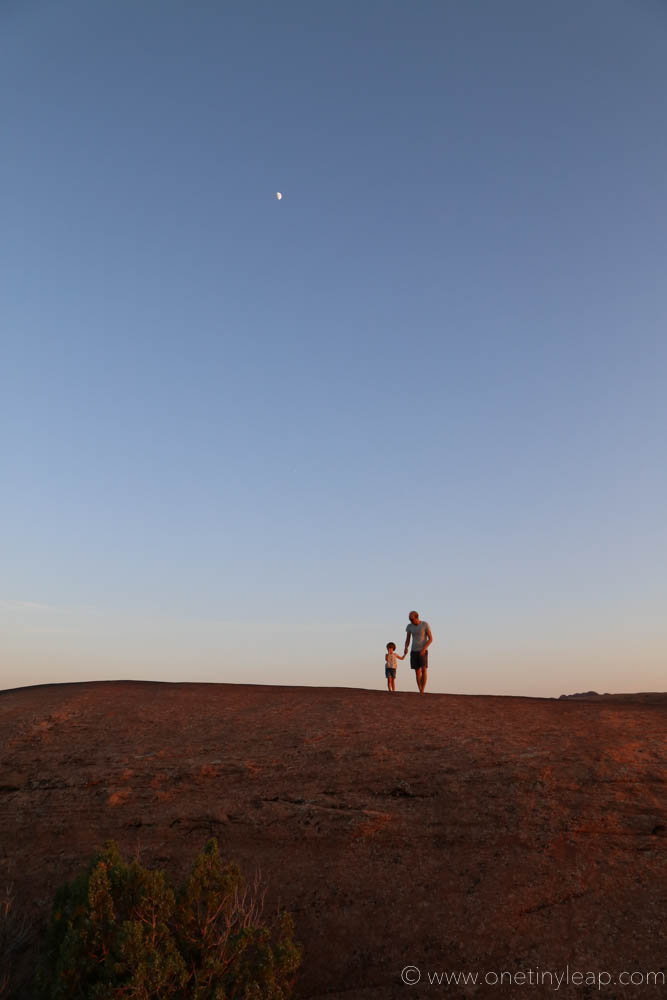 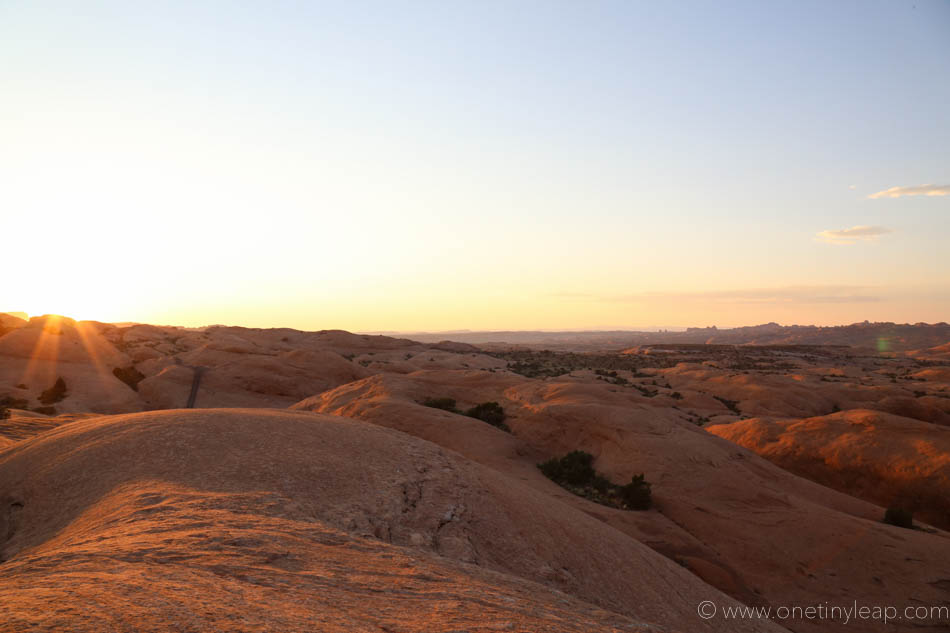 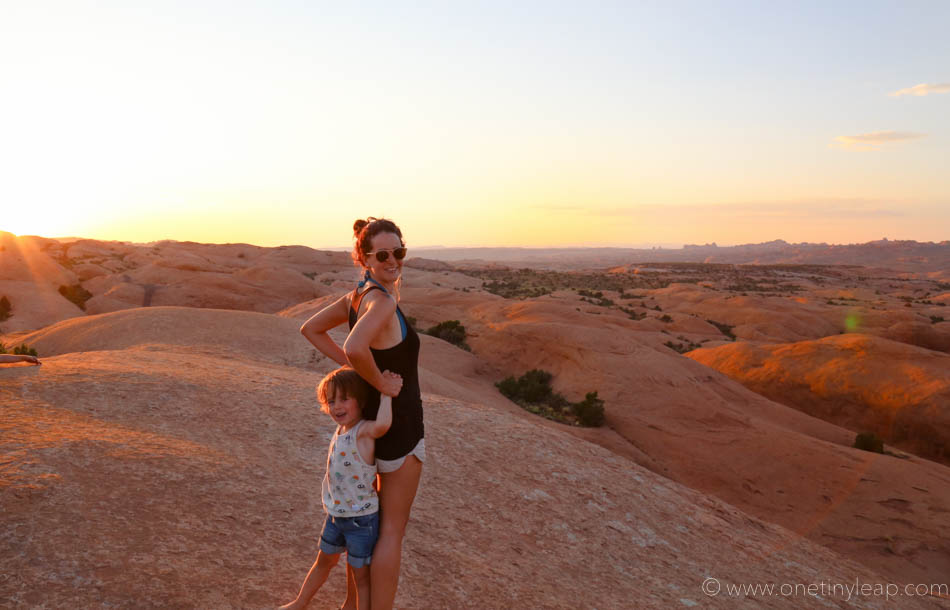 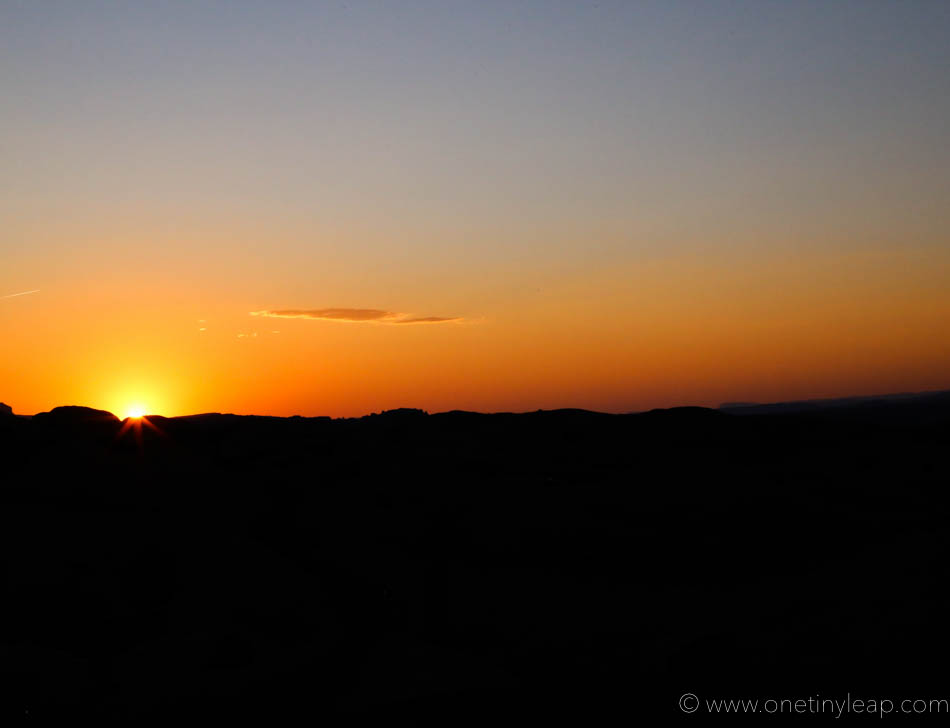 As you can probably tell, I can’t recommend a trip down to Moab enough. We’re four months into our USA roadtrip and this was hands-down one of the highlights, even with the excruciating heat and a grumpy 3 year old!

Where to stay in Moab with kids: We stayed at a cabin in Moab’s KOA, which cost $64/night (we got 10% discount with our membership card). The campsite had great facilities, a large swimming pool and our cabin was in a little cul-de-sac overlooking the hills. It would’ve been too hot for tent-camping we think, and felt sorry for those who were. Even at night temperatures topped 90F.

Where to eat: It was too hot to cook on our camping stove, so we went out for dinner quite a bit since the local restaurant scene is actually pretty good.

Breakfast: Treehouse Café had delicious and healthy smoothies and ambitious food (but didn’t deliver in my case, with pesto & spinach scrambled eggs – the texture was awful).

One of the best breakfasts we had was in the Jailhouse Café – a breakfast-only place that has a nice shaded back-garden and the best eggs fiorentine (presented with a southern-style hollandaise) I’ve ever tasted.

Lunch/Dinner: The Jay’s Italian had pretty good pizzas and a good kids’ menu, and was very family-friendly. The The Spoke on Center restaurant was recommended to us by our Hummer driver, and turned out to be a great choice. A new restaurant in Moab, this burger-joint is a great space, filled with creative bike-décor and has fantastic local beers.

Where to shop: The whole town is full of fun little boutiques selling jewellery made of Moab rock and crystal, t-shirts stained with red rock dust, souvenirs, etc. One place you can’t miss out on though is the dinosaur/stone shop – this is like entering someone’s personal treasure trove, filled with thousands of precious stones, dinosaur bones and even meteorite fragments turned into necklaces!

Well done for making it to the end! Sorry for all the pics, I just loved them all too much! I hope we’ve inspired you to go online and book yourself a trip to Utah, one that is bound to be a hit with the whole family! Just try to go in Spring or Autumn to avoid the blazing heat.

We’re linking up with the always fantastic Coombe Mill Blog (go have a read if you haven’t) for #CountryKids ^ My Travel Monkey and Packing My Suitcase for #MondayEscapes.

Getting to Know Yosemite National Park

Over the Golden Gate Bridge // Sausalito &...

Good God those photos look amazing. Every week I wonder what on earth you will get upto next, this journey just gets more epic with each installment. I’d love to visit Utah, everything about it is so different and intriguing. One day, yes one day I must travel the world! for now I’ll just keep enjoying your posts, you all look so healthy and full of life. Thank you for sharing each chapter of your tour on Country Kids.

Thanks Fiona!! This week blew our mind away, we had not anticipated just how incredible it was going to be! I really want to go back to Utah. We had to cancel Bryce because of the heat, so can’t wait to come back (in Spring!!). x

Oh, this has just been added to my must-do list for while we’re living over here!! Fabulous photos, what an amazing place 🙂 #countrykids

Oh, you have to!! And while you’re there, pop up to Yellowstone too 😉 xx

Oh my! I want to go! As I was readig, I was wondering which season would be best to visit. I see you added it in. Just amazing photos. What an amazing trip you are on.

Thanks Cheryl, it was an incredible adventure. The weather was unusual for the time of year they said, but still I would recommend going in Spring, just in case! x

Beautiful! I have always wanted to visit the area. I don’t hear but good things about Moab as gateway for the different parks and attractions.

Absolutely! We wish we had more time (and less heat) to explore all the parks, but it really is a gateway to some of the country’s top spots. We can’t wait to get back 🙂

Beautiful photos I can see why you couldn’t narrow it down! #MondayEscapes

Thank you! I had to do another post 😉 x

Absolutely stunning photos and landscape. As a geographer, your adventures really make me jealous.

Oh I didn’t know you are a geographer! You would’ve loved it here, the rock formations are out of this world. Oh, and keep an eye for our Yellowstone post, you’ll like that one 🙂 I really wish I knew more about geology, and these visits have definitely given me a push to go and learn more. x

Seriously Maria, I am getting more and more jealous each week. BUT I love reading about your US adventure and Moab just looks like it’s on another planet! I love the photos – and it’s so grea to read the campsites are so well-maintained and a cabin sounds like the perfect accommodation. Thanks for sharing on #MondayEscapes

Doesn’t it just? It was such an overwhelming experience, we didn’t know we were going to love it that much. I’d love to come back!

I can’t get enough of your travel posts, what an incredible journey! x

Thanks lovely! That was such an amazing week! x